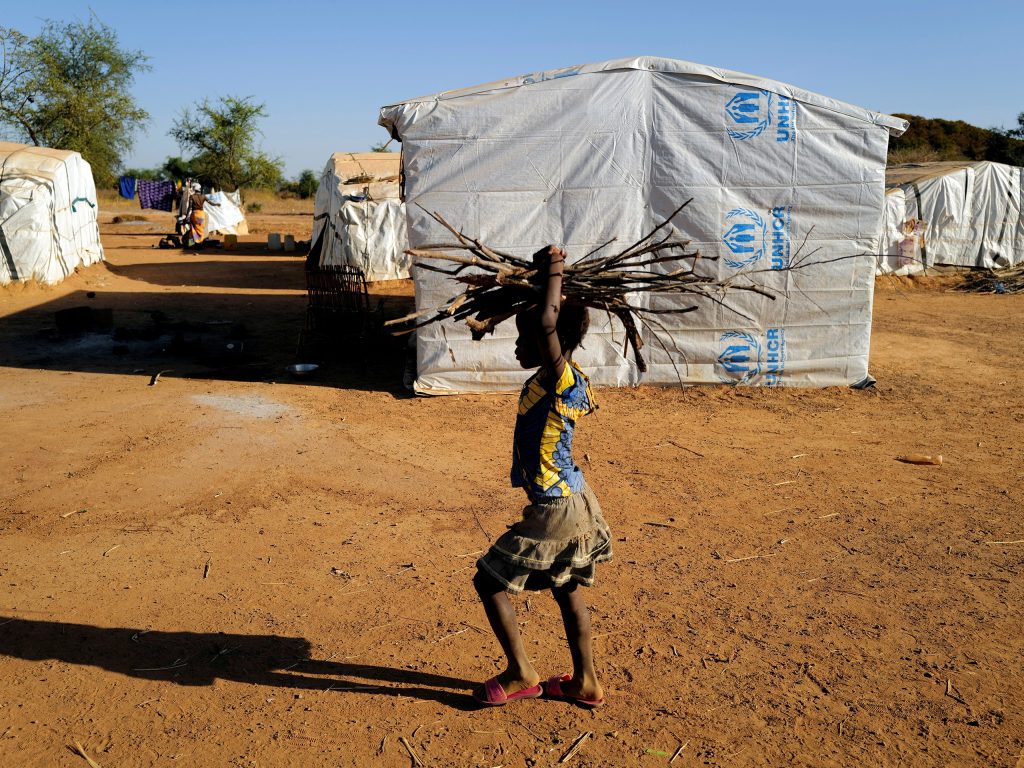 Sitting outside her tent in a camp for Burkinabe residents displaced from their homes, Christine Yangane called for food for her children, who she said went days without a meal.

“My children want to eat, but I have nothing to eat. They can’t stop crying because they’re hungry,” said the 39-year-old mother of five in Dori camp, Burkina Faso. “Since we arrived here, life has been difficult. We don’t have enough bedding, water, clothes and hygiene kits, and our children don’t go to school.

Yangane and her children escaped death earlier this year when gunmen, suspected Islamists, attacked her Dori section in the middle of the night and massacred dozens of residents, including her husband.

“My husband was unlucky. He was murdered outside the house as he tried to protect us from the attackers. I was forced to take refuge to protect myself and my children from further attacks,” she said.

His story is similar to that of tens of thousands of people who have been displaced due to the ongoing conflict in the West African country of more than 20 million people. The situation has prompted church leaders to mobilize funds and aid to help those facing hardship due to the conflict.

According to the International Crisis Group, the landlocked country has experienced many challenges. The nation experienced a military coup that killed dozens earlier this year. Violent extremist groups are increasingly launching attacks across the country, particularly in the border regions of Mali and Niger. Farmers and herders are going hungry and their animals are dying because of climate change.

Since the start of the conflict in 2015, hundreds of Christians have been murdered for their faith, dozens kidnapped, thousands displaced and hundreds of churches closed due to security concerns and threats of attack, according to a 2019 US State Department report.

The most recent attack was that of Marianite Sister Suellen Tennyson, 83, who had worked in the country since 2014. She was abducted by gunmen in Yalgo in early April, and her whereabouts remain unknown.

“These are some of the challenges we face as a country. The people of this country are suffering because of the conflict,” said Father Moussa Welgo, priest of the Diocese of Dori.

He said the situation has worsened recently and the victims of the conflict need help. “As a church, we’ve said we can’t sit back and watch our people die. We have come together to raise funds, food, clothing, blankets and other necessities to help people facing crises in our country.

“We have sensitized our worshipers to contribute whatever they have to help vulnerable people in the camps,” he said. “We fundraise in our churches across the country every week on Sundays, so we can reach many victims.”

Bishop Laurent Birfuoré Dabiré de Dori said his northeastern region had been the most affected by the terrorist attacks. He said jihadists linked to al-Qaeda and the Islamic State group had targeted civilians and soldiers with kidnappings and executions.

“We need your prayers. The situation is getting worse every day. You cannot walk freely in Dori because of the fear of terrorist attacks,” he said. “The conflict has left people suffering, as most are in refugee camps. Others suffer from losing loved ones and possessions.

Bishop Dabiré, President of the Episcopal Conference of Burkina Faso and Niger, said FCSAD was an initiative of the Catholic Church to show compassion and help people facing various challenges due to the ongoing conflict in the country. . Church leaders created the fund to ensure that resources are always available in times of crisis.

“The fund aims to show the compassion, charity and mercy of the Catholic Church in Burkina Faso to people and communities facing crises, both inside and outside Burkina Faso,” said Bishop Dabiré in a press release on March 10. He said the fund would be “used to support and care for victims of natural disasters, food and nutrition crises, socio-political crises, epidemics, etc.

Bishop Dabiré said the money was collected by Christians in all parishes in the country and outside. He also said that various religious institutions and donors contribute to the fund.

Yangane said her children could die if help does not arrive quickly. “We need help because we have nothing. We will just die from hunger,” she said.

Meanwhile, some Catholics living in the north of the country complain of being targeted by jihadists in attacks.

Mariam Mare, a Christian living in a displaced persons camp in Dori, said her two brothers were murdered last October because they were Christians.

Mare said the terrorists arrived in their village and started collecting taxes which included cows, money and food from every house. They asked if the people were Christians or Muslims, she said, adding that all the Christians except a few who escaped were murdered and their animals impounded.

According to a US State Department report, Christians make up about 23% of the country’s population, with Catholics making up 19% and various Protestant groups 4%. However, most of the population in northern Burkina Faso is 95.2% Muslim, while Catholics stand at 1.2%.

“We live in fear of attacks because of our faith,” Mare said. “Terrorists are now targeting Christians and churches. It’s hard for someone to pray or even say you’re a Christian.

Allan Kabore in Ouagadougou, Burkina Faso, contributed to this story.