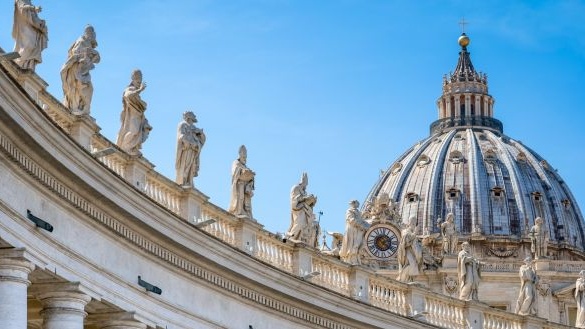 Pope Francis has triggered a synodal process of consultations in the Catholic Church. It provides opportunities for effective change. It can also turn out to be a failure. Over the past few months, I have heard many skeptical voices. “By providing guidance documents, the curia takes discussions away from the real issues.” “It will all come down to talking.” “Nothing will really change.”

I do not agree. Significant changes can occur if thinking Catholics take the trouble to voice their true concerns.

When I wrote my last book, Ten Commandments for Church Reform, I had no idea that the synodal process was going to take place. But now I see how it could help because it highlights areas where the church needs urgent change.

Let me explain. The subtitle reads: “Memoirs of a Catholic priest”. Yes, the book is a story, a narration. I describe the course of my life, my experiences as a Catholic since my youth, then my studies in Rome, my decades of ministry in India, my mandate as Vicar General of the Missionaries of Mill Hill, my worldwide apostolate. I also document the shortcomings of our current church.

In recent decades, critical theologians have been silenced or fired from their teaching positions in Catholic institutions and banished from papal commissions. . .

“Wait”, I hear someone say, “if it’s just a story, it might be quite amusing, but it has no theological value”. Not so. In the past, we were told that theology meant reflection on two sources: Scripture and tradition. Not enough. Another essential component is real life, the world we live in.

Vatican II declared: “The seed which is the word of God sprouts from the good ground [of each local culture] and draws its moisture from it, which it transforms and assimilates into itself, and ultimately bears much fruit. . .” The council also taught that the new perspectives of our own time demand theological inquiry. In other words: from the soil of our own contemporary world, the Christian faith will draw new values ​​that call for a new theological appreciation.

When I was working in Hyderabad, India, a primary school teacher contacted me. She had just recovered from the delivery of a stillborn baby. Because she had nearly died in the process and a repeated event would “endanger her life”, the surgeon advised her to have her tubes tied, which she agreed to.

She had already given birth to three children. “I spoke about it to Father Alfred Fernandez, my parish priest,” she told me. “He shouted, ‘Woman, what have you done? You will go to hell. He then quoted me Humanae Vitae. A few months later, the Vatican elevated Father Fernandez to the rank of bishop. . .

The incident shows more than just a lack of pastoral empathy. It illustrates the underlying structural problems. Pope Paul VI published Humanae Vitae in 1968, with his ban on any artificial interference in the marriage record against the advice of the vast majority – 68 of the 72 members – of a papal commission of experts.

The vast majority of priests are deeply motivated and render commendable service. But the system by which the church is governed croaks in its joints

A serious mistake. The scriptures tell us that prophets and teachers function in the Christian community alongside its leaders. Despite this, in recent decades critical theologians have been silenced or fired from their teaching positions in Catholic institutions and banished from papal commissions. . .

That callous Father Fernandez I mentioned earlier was chosen to be bishop, probably because he was an archconservative. Once I heard him preach that the Second Vatican Council had betrayed Jesus Christ.

He exposes the question of the election of bishops. In the early Church, the priests and faithful of a diocesan community elected their own bishop. Over the centuries, the curia gradually took over. We see the result.

The bishops appointed by our recent Popes John Paul II and Benedict XIV have for the most part been traditional nods rather than caring shepherds. We need to return to a more democratic process for electing bishops.

Don’t get me wrong. Jesus gave authority to the apostles and their successors. But he did not impose the top-down dictatorial structure that the Church inherited from the Roman Empire and the feudal Middle Ages. Jesus chose only men to be the patriarchs of his new Israel. In doing so, he did not exclude women from Holy Orders forever.

The Catholic faith supports millions and millions in every corner of the world. The vast majority of priests are deeply motivated and render commendable service. But the system by which the church is governed croaks in its joints. It is full of outdated beliefs and practices. It is not irremediable, but the repair calls for drastic and harsh action.