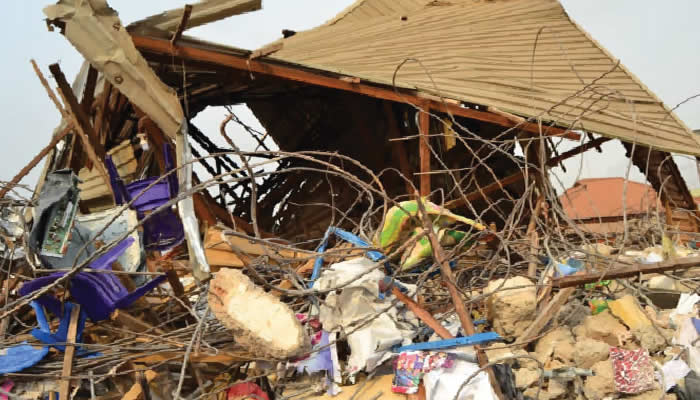 It was an emotionally charged environment as well-wishers offered their condolences to the families whose loved ones were among the dead and injured victims of a church building that collapsed on Tuesday during the service at Okpanam in the area of Oshimili North Local Government of Delta State.

The one-story building collapsed around 6 p.m. as devotees of Salvation Ministries, Okpanam, observed a 21-day fast and prayer.

The children’s section of the church was reportedly hit and children trapped during the service.

It was understood that the church building which has been in existence for over 10 years was originally designed as a square before the church occupied the upper room and was remodeled to suit its use.

It collapsed while being rebuilt by a new owner who recently purchased the property.

It is also alleged that the new owner of the building asked the tenants to leave the premises and that he reimbursed part of them.

The tenants would have left the building. But the pastor in charge of the church reportedly refused to leave on the grounds that the church’s rent would expire in February 2022. The development reportedly prompted the property owner to start rebuilding the building before it collapsed.

The church is one of the branches of the church led by Pastor David Ibiyeomie based in Port Harcourt, Rivers State. A statement from the church during Ibiyeomie’s visit to the injured at a hospital said the building owner had authorized the removal of a pillar from the structure during the church service.

It said in part: “Following the collapse of a church building rented by Salvation Ministries in Okpanam, emerging facts from Delta State reveal that: The facility, whose rent was renewed in November 2021 , was sold with its tenancy in December 2021. The new owner without notice to the tenants, Salvation Ministries, entered the church to take custody of the building.

“The church, shocked by the development, approached its landlord, the former landlord, who confirmed the sale of the building and offered to refund the remaining rent. Attempts by church authorities to negotiate with the new owner yielded no results as he was determined to get his property back.Things came to a head when during the church service he authorized the removal of a pillar in the building.

The church in the statement said the action of the building’s new owner was the immediate cause of the collapse which resulted in preventable losses.

The church has called on the state government and the Nigerian police to invite the new owner of the building as part of their investigations into the cause of the incident.

Men from the Delta State Emergency Management Agency, Fire Department and State Police Command were part of the rescue team as trapped children cried under the rubble of the collapsed building.

Many women and children were transported in ambulances which took them to Asaba Specialty Hospital and Asaba Federal Medical Center for treatment.

The rescue operation which lasted more than nine hours ended around 2 a.m. Wednesday morning with four dead and others injured.

Among the survivors were Mrs. Chidinma Ugochukwu, her seven-month-old and three-year-old children.

She told our correspondent at the scene of the disaster on Wednesday that worshipers during the church service were about to receive Holy Communion when the building collapsed.

Ugochukwu “After the preaching of the man of God and it was time for Holy Communion, the man of God told us that it is not for everyone but for people with serious illnesses, those with diseases such as diabetes, HIV and cancer. We were there listening, then all of a sudden we discovered that there was a loud noise. It was like magic, what we saw , was that everyone was leaning in. My baby was on my back and the eldest was in the children’s department.

“After the incident, many people came to help us. I was there trying to get the baby out of my back. A man said I had to give him the baby and I did. I started looking for the older brother and later he was brought back alive. Many people were injured. Our bags, phones and shoes were lost but we thank God for saving our lives.

“Many people survived and I thank God for the Delta State government because immediately the building collapsed a rescue team including firefighters and others came.”

Another survivor, Mr Grace Ibe, said the service was underway when the building collapsed with a loud bang.

“We were clapping and praying and about to take Holy Communion when suddenly we heard a crash and the building collapsed on top of us, including the children’s section.”

She said the church was observing its 21-day New Year’s fast and prayer, adding that church members had come to break the day’s fast with a communion service when the incident occurred.

A woman identified only as Ms Okonkwo who cried at the scene said her three children were among those trapped in the building.

She said, “I thank God for saving my three children. Two have been released while the other is currently receiving treatment in hospital.

A father-of-two, Mr Paul Wessey, told our correspondent at the hospital that his children were responding to treatment.

Wessey said he was in the office the day of the incident, noting that immediately after receiving a distress call he ran to various hospitals looking for his children.

He added: “Two of my sons and two of my sister-in-law’s sons were hit. I was not at church that day. I was in the office. It was a terrible experience. It’s not even something to talk about. I thank God it’s a wound and in time it will heal. I did x-rays for my four year old and we took him to the theater to have the wound cleaned.

Moreover, Mrs Rachael Odum, who also survived alongside her three children aged nine, seven and four, said the congregation was about to receive Holy Communion when tragedy struck.

Odum said: “I was there Tuesday night with my family trapped inside. I came back on Wednesday to check on our members. My family is safe. I have three children. At the time, the service was about to close. We were about to take Holy Communion when the building collapsed and we were trapped.

The collapsed one-story building sparked a commotion in neighboring Asaba as people wept.

When our correspondent visited Asaba Federal Medical Center and Asaba Specialty Hospital on Wednesday, many victims had been discharged while about 11 victims were still in various wards receiving treatment.

At FMC, one of the victims identified only as a favor was still in the children’s ward and another identified as Anastasia, a 30-year-old woman was seen in the orthopedic ward.

FMC Medical Advisory Committee Chairman Dr. Emmanuel Ezunu said seven victims were brought to the center and only one was brought back dead.

Ezunu said, “We have six patients at FMC. One was brought in dead unidentified and we’ve already moved it to the morgue until they identify the body.

“Three victims; Eight-year-old Sophia, three-year-old Mophia and Sunshine have been released while three others are receiving treatment, including a 30-year-old woman, Anastasia, who is in the orthopedic ward.

He said: “Eighteen people were initially rescued, four have been released, 11 are still receiving treatment, four deaths have been recorded, including two children and two women. Their names are currently unknown. Please debunk rumors circulating that 10 people have died. It’s not correct.”

The state government on Wednesday announced the formation of a commission of inquiry to examine the immediate and distant causes of the building’s collapse.

“Above all, we want to thank Almighty God for what happened. During my inspection visit, we discovered that it could have been worse. What I saw was almost a total collapse. We had a lot of children upstairs when the building completely collapsed. I will not be competent to tell you what caused the building to collapse.

“We assure the Deltans and everyone that the report of this particular incident will be made public when it finally comes out. Unfortunately we have recorded four losses and as I said it could have been worse.”

Otuaro noted that the state government would be an integral part of what happened and would do everything in their power to ensure that everything was fine with the respective families.

All rights reserved. This material and any other digital content on this website may not be reproduced, published, broadcast, rewritten or redistributed in whole or in part without the prior express written permission of PUNCH.