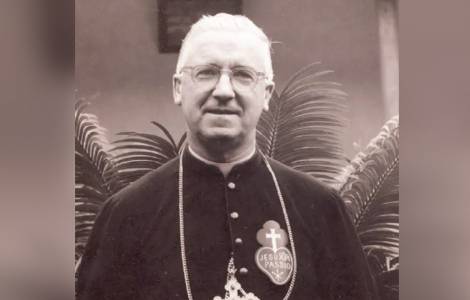 Rome (Agenzia Fides) – During the audience granted on April 9 to Cardinal Marcello Semeraro, Prefect of the Congregation for the Causes of Saints, the Holy Father Francis authorized the Congregation to promulgate certain decrees, including those concerning the recognition of heroic virtues of two missionary bishops: Martino Fulgenzio Elorza Legaristi, of the Congregation of the Passion of Jesus Christ, first bishop of the prelature of Moyobamba; born December 30, 1899 in Elgueta (Spain) and died December 30, 1966 in Lima (Peru); Francesco Costantino Mazzieri, of the Order of Friars Minor Conventual, Bishop of Ndola; born March 25, 1889 in Abbadia di Osimo (Italy) and died August 19, 1983 in Ibenga (Zambia). Here are some biographical notes of the two bishops, taken from the documentation of the Congregation for the Causes of Saints.
Martino Fulgenzio Elorza Legaristi, after having been Director of Students, Provincial Councilor and Provincial Superior of the Passionists in Spain, he was elected Delegate of the Passionists for America in 1947 and in 1949, Apostolic Administrator of the Prelature of Moyobamba (Peru), of appointed prelate on October 3, 1953. He was ordained bishop in Lima on February 24, 1954. In a context of poverty and great religious ignorance, he was a zealous and courageous pastor: he often visited parishes, traveled on foot, on horseback or by canoe; he invited priests, monks and nuns for the work of evangelization and defense of the Catholic faith. He encouraged catechesis and the education of children and women. He undertook the construction of the cathedral and new churches in the villages, worked on the creation of the Seminary. He looked after the needs of the poor. He died in Lima after a heart attack. After his ordination among the conventual Friars Minor, Francesco Costantino Mazzieri was rector of the minor seminary of the Franciscan province of Marche, guardian of several convents, secretary of the province and parish priest. In 1930, he was sent, with six brothers, to what is now Zambia, to the district of Ndola (then Northern Rhodesia), which was a British colony and where the presence of the Catholic Church was still totally absent. He then devoted himself to a progressive and intense evangelization of this territory. With the progress of the missionary Church, he was appointed Apostolic Prefect, then Apostolic Vicar and consecrated bishop on February 13, 1949. He lived about 36 years of assiduous and intense missionary activity, including 17 years of episcopal ministry. After his resignation as bishop, at the age of 76, he chose to reside in the rural area of ​​St. Theresa (Ibenga-Zambia), living as a brother with his confreres and continuing his pastoral work. He died there at the age of 94, having received various honors from the civil authorities of Zambia. (SL) (Agenzia Fides, 4/11/2022)

What does this mean for Catholics? —GetReligion