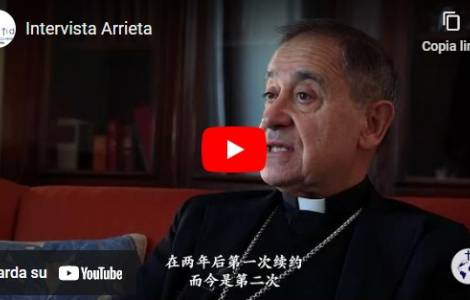 VATICAN – Archbishop Arrieta: the agreement on the appointment of Chinese Catholic bishops is not new in the history of the Church

VATICAN – Archbishop Arrieta: the agreement on the appointment of Chinese Catholic bishops is not new in the history of the Church

Vatican City (Agenzia Fides) – The so-called “sinicization” of the Catholic Church in China, that is, the adaptation of forms of ecclesial life to the Chinese cultural and social context, in itself “is not a problem “. The important thing is that in this adaptation the “essential things” which characterize the very nature of the Church are preserved, and which in reality “are few”. The Spanish Bishop Juan Ignacio Arrieta, Secretary of the Department for Legislative Texts, affirms this with determination in the video interview made for Agenzia Fides by Teresa Tseng Kuang yi (see attached video).
The Catholic Church, in carrying out her mission – adds Archbishop Arrieta – has always recognized the legitimacy and also the need to incorporate elements drawn from the context of each country and the traditional expressions of each culture. The only condition is that such adaptations do not compromise or obscure the “essentials,” the constituent genetic factors that shape the identity of the Catholic Church, and the performance proper to it.
In this regard, the Secretary of the Dicastery for Legislative Texts also commented on the Provisional Agreement between the People’s Republic of China and the Holy See on the appointment of Chinese bishops, signed in September 2018 and renewed for the second time last October. .
The Agreement on Episcopal Appointment Processes in China – underlines Archbishop Arrieta – aims to guarantee that the appointments of bishops to head Catholic communities are made “by mutual agreement between the Chinese government and the Pope”, which, according to which is also defined by the Code of Canon Law, has the prerogative of freely appointing bishops or confirming “those who have been legitimately elected” (Can. 377, §1).
Archbishop Arrieta also underlines that in the relations established to sign the Agreement and verify its concrete application, the Holy See and “the legitimate authorities of the Chinese people” recognize each other as interlocutors.
In the video interview, the secretary of the Dicastery for Legislative Texts also points out that the direct participation of civil authorities in the procedures for appointing Catholic bishops is certainly not a Chinese prerogative or a novelty in the history of the Church.
In this sense, Bishop Arrieta, born in Vitoria, in the Basque Country, recalls what happened in Spain during the time of Francisco Franco, when to elect the Spanish bishops “the government presented three names, and the pope chosen”.
In the opening lines of the video interview, Bishop Arrieta confides that he spent 20 years cultivating relationships and exchanges with “Chinese friends” and that he visited China and was impressed by these people “to ancient culture”. Arrieta adds that he is not officially and directly involved in the relations of the Holy See with the representatives of the Chinese government, and at the same time reaffirms his commitment to work according to his skills to increase confidence in the relations between the Holy Headquarters and Beijing, also cultivate cultural relations and friendships with Chinese scholars and scholars.
Archbishop Arrieta refers to his efforts to disseminate the study of ecclesiastical law in China, in order to offer avenues for reflection and deepening for those interested in civil law regulations relating to communities of believers in China.
Juan Ignacio Arrieta Ochoa de Chinchetru, born April 10, 1951, was ordained a priest of the Prelature of the Holy Cross (Opus Dei) on August 23, 1977.
He obtained doctorates in canon law and jurisprudence and was professor of canon law, first at the University of Navarre (Spain), then in Rome and Venice. He was Dean of the Faculty of Canon Law of the Pontifical Holy Cross University from its creation in 1984 until 1993, then from 1995 to 1999.
In 2003, he became Dean of the Saint Pius X Institute of Canon Law in Venice. He was appointed Secretary of the Pontifical Council (now Dicastery) for Legislative Texts on February 15, 2007, and appointed Titular Bishop of Civitate on April 12, 2008. He received his episcopal consecration on May 1, 2008.
In his essay devoted to the organizational aspects of Church-State relations in China, contained in the volume entitled “The Agreement between the Holy See and China” (published in 2019 by Urbaniana University Press and edited by Professors Agostino Giovagnoli and Elisa Giunipero), Bishop Arrieta, referring to the events of Chinese Catholicism, bears witness to how “canon law, due to its flexibility, continues to be able to solve today, as it has done in the centuries in different cultures and historical situations, the problems that can arise from respecting only the essential elements of the theology of the Church”. (GV) Agenzia Fides 23/11/2022)