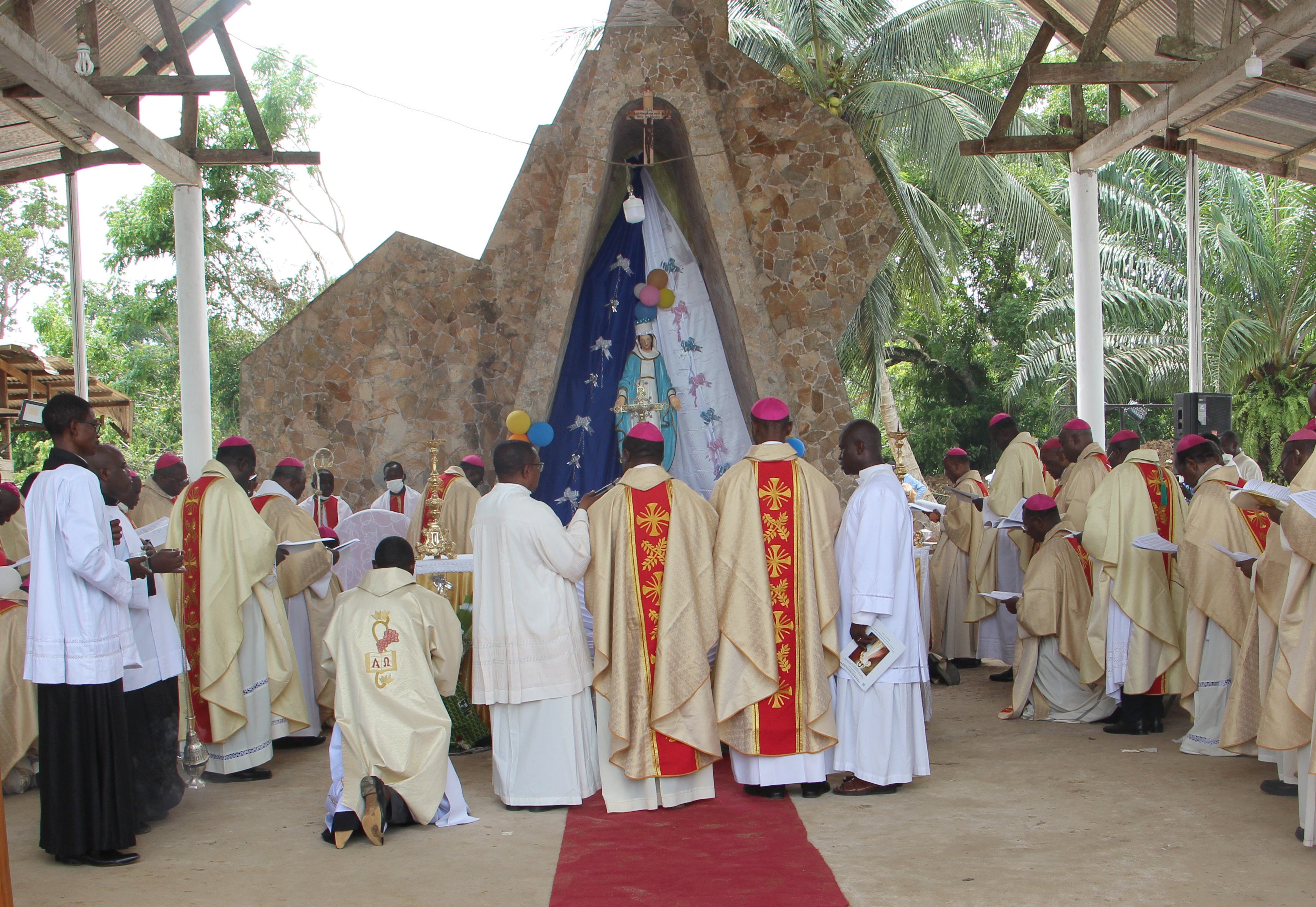 “Thirst for peace”: Bishops and Catholics in Cameroon rededicate the nation to Mary

MARIENBERG, Cameroon – Battered by a separatist war in the west, a Boko Haram insurgency in the north and an influx of Central African refugees in the east, Cameroon is a country in crisis.

And with no end in sight, Catholics in Cameroon have turned to Mary to intercede for them.

On April 23 and 24, more than 1,200 Catholics gathered around their bishops at the pilgrimage site of Marienberg, about 185 km from the country’s capital, Yaoundé.

They were there to rededicate Cameroon to the Immaculate Heart of Mary, 12 decades after the German Pallottine Fathers consecrated the country to Mary in a move now seen by Cameroonian Catholics as the very foundations of Catholicism in the country.

“The presence of all these Christians testifies to the importance that Mary occupies in their life of faith, but also to the thirst for peace that inhabits the Cameroonian people. We must therefore ask God for this peace, but also do whatever is necessary at our level to maintain it, because peace is a grace, but also a personal effort. And this undoubtedly passes through the acquisition of a quality of God which must also become ours: mercy”, declared Mgr Abraham Bouala Kome, president of the Cameroonian episcopal conference.

“Peace is what is normal; when peace is absent, we are in something abnormal, and we must always look for what is normal,” he said.

Bishop Michael Miabesue Bibi of Buea spoke of the difficulties people face daily in the Anglophone regions of Cameroon, where a separatist war now in its sixth year has killed more than 4,000 people, and more than one million have been forced to flee their homes.

He said Catholic Press Service that on recent trips “I have seen so much destruction; I have seen children who cannot go to school and you wonder if you can continue to live like this.

A 70-year-old retired military officer who identified himself simply as Gabriel recounted CNS that instead of quietly enjoying his deserved retirement, he is faced with the daily realities of war.

“It’s the first time I’ve gone on a pilgrimage,” he said. “When I heard it was a pilgrimage for peace, I couldn’t stay back. Gunfire has become a daily occurrence for those of us who live in Bamenda. The small business ventures I had started all disappeared because of the fighting.

With one knee to the ground, he said the peace was “priceless”.

And while prayer is certainly essential, Bibi said the root causes of the conflict must be addressed if solutions are to be found.

In particular reference to the struggle of Anglophones in Cameroon to secede from the rest of the country and to form a new nation which they call Ambazonia, Bibi said the problem can only be solved if Anglophones get justice.

“When we speak of justice, it means that we think of the common good,” he said. CNS.

“If there is something that belongs to everyone, it should be shared equally. That’s what we mean by fairness, so I think as soon as everyone feels like they’ve got what they deserve, they’ll feel like they’re being treated fairly.

For decades, Anglophones in Cameroon have complained of being marginalized. Pent-up frustrations erupted into violence in 2016 when the government responded with lethal force to peaceful protests by English-speaking lawyers and teachers. An extremist uprising ensued and for five years they have been fighting to create an independent state.

Even as the country’s Catholics look to Mary for a solution, the man widely credited with brokering the end of the apartheid regime in South Africa says Cameroon can learn from the example of its country.

“People in Cameroon are suffering and paying a price when there is a solution,” said Roelf Meyer CNS. “We succeeded in making peace in South Africa about 30 years ago. From this experience, I can say that there is no problem that cannot be solved. I believe our experience in South Africa can be extended and valuable to the people of Cameroon.

But, he added, “you have to change your mind and take responsibility for resolving the crisis.”