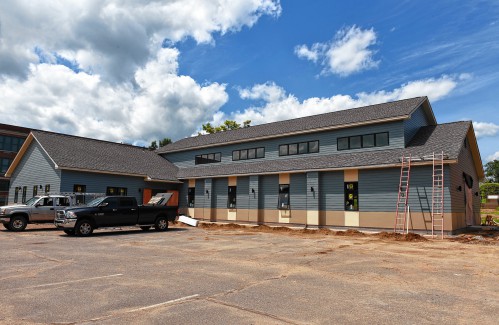 GREENFIELD — Construction of the new multipurpose building at Blessed Sacrament Church is expected to be complete by October, after starting last September and being delayed by weeks due to the coronavirus pandemic.

At 7,700 square feet and one story, the project is worth about $2.4 million, according to Kevin O’Neil, the building’s architect.

The new building is adjacent to the church, at the corner of Federal Street and Beacon Street, and will serve as space for large gatherings, religious education classes, offices and a food pantry.

Currently, all of these functions are spread across several buildings in Greenfield. The goal of the new building is to strengthen the church and its resources, O’Neil said.

“Right now we have multiple buildings,” O’Neil said. “The idea was to have an efficient and multifunctional building next to the church.”

About three years ago, the church sold its school and convent to nearby Baystate Franklin Medical Center, said Reverend Tim Campoli, who is pastor of Blessed Sacrament and its sister church, Holy Trinity.

Since then, he said the church has held its religious education classes in space rented from the Temple Israel Synagogue.

The office spaces were in the parsonage, a few blocks from Beacon Street at the corner of High Street. Those offices will move to the new building and the church will sell the rectory space, Campoli said. The priest’s quarters, which are also in the presbytery, will be moved to the Holy Trinity presbytery, he said.

Funding for the $2.4 million project came from the sale of the school and convent, and a three-year fundraising campaign which, when it ended in 2016, had raised approximately $1 million. of dollars.

Construction on the new building began in September 2019, O’Neil said. It was originally supposed to be finished by September 2020, but was delayed for a few weeks by the coronavirus pandemic, and should now be ready by October, he said.

The building is designed to be consistent in style with the church, O’Neil explained, in both its facade and its footprint. The side panels will be similar to those of the church and the footprint follows a similar cruciform shape.

The interior is different in that it’s mostly one large space, with partitions that can be opened or closed to create separate classrooms or small meeting rooms, O’Neil said. .

Solar panels on the roof will help make the building energy efficient, which ties into the overall goal of consolidation and resource conservation, O’Neil added.

Now the exterior of the building is largely complete and drywall is being installed inside. Painting will likely begin within the next two weeks, O’Neil said, and the last piece before the scheduled October opening will be the furniture addition.