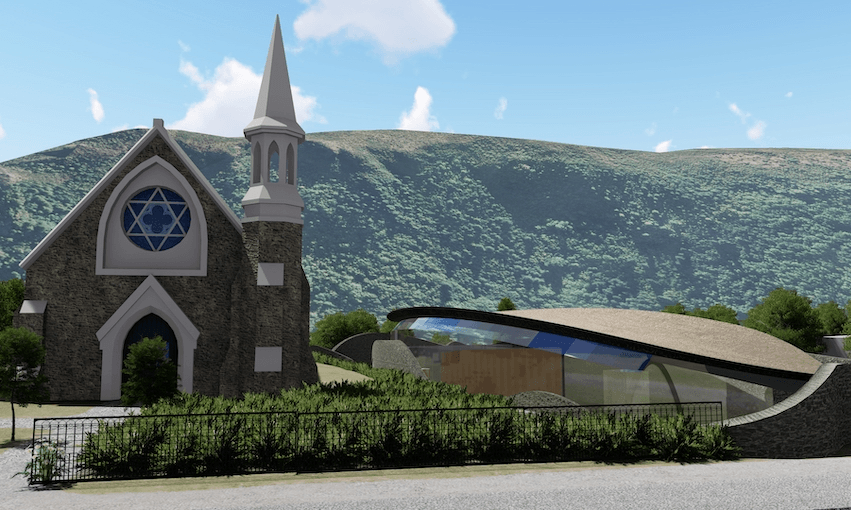 Its name and design are meant to evoke peace and reconciliation, but the proposed Olive Leaf building in historic Arrowtown has instead fueled division, backlash and now legal action. reports Oliver Lewis.

When the Eiffel Tower was proposed in Paris, a group of artists and writers filed a protest petition deploring it as an insult to French taste. In their eyes, the tower was monstrous, an odious column of sheet metal which, like a gigantic chimney, would rise and humble their beloved monuments.

Today the tower is synonymous with the city, an icon of French culture and one of the most distinctive buildings in the world. The opposition? Quiet.

Proponents of The Olive Leaf, a leaf-shaped church hall and community facility in Arrowtown, the gold rush town of Otago, hope the divisiveness surrounding their project will also evaporate. Like the Eiffel Tower and other examples of contemporary architecture, they believe naysayers will appreciate the building once – or more accurately, if – it is ever built.

“It will be the most beautiful building and it will be loved, sought after and cherished by the people of Arrowtown and the surrounding area – mark my words,” said Olive Leaf Center Trust President Colin Bellett.

Since it was first proposed several years ago, the project has divided opinion in the local community and the small congregation at St Patrick’s Catholic Church, the heritage-listed building The Olive Leaf is supposed to sit next to it. “No Leaf Building in Arrowtown!” posters were put up, and in 2016 residents formed the incorporated society, NoLeaf, to unite to oppose the development.

A promotional video for the building shows it dug into the ground next to the church, its leaf-shaped, stone-clad roof appearing to hover above panes of glass. Unapologetically modern and inspired by natural forms, The Olive Leaf is adorned with swirling mosaics and features upper and lower levels, including space for quiet reflection and visitor accommodation.

Dating back to the discovery of gold on the Arrow River in 1862, Arrowtown is proud of its heritage. The city, home to many historic buildings, has design guidelines that aim to protect and enhance its historic character. The Olive Leaf and St Patrick’s, built between 1873 and 1902, are within the Residential Historic Management Area, an overlay in Queenstown Lakes District Council’s District Plan which aims to preserve the character of the area and ensure that any new development is sympathetic.

“If you plant something like this leaf in the middle, it disrupts the whole environment,” says Hulls, who has since moved to Dunedin. “It’s like a damn alien spaceship. The shape is unlike anything.

And for many residents, it is essential to preserve the unique character of their city. Realtor Michael Tierney, a NoLeaf member who has lived in Arrowtown for more than 30 years, says individuals and businesses spend huge amounts of money to ensure any new construction meets planning and design requirements.

They see The Olive Leaf as not doing the same, says Tierney.

“The opposition comes from people who have already been through the process, who already live here, who say, ‘This is not good. We don’t want the historic nature of Arrowtown to be altered.”

“It’s the only living historic town in all of New Zealand and I would have thought we’d like it to stay that way.”

On Nov. 30 last year, the two commissioners who heard the Olive Leaf Center Trust’s application denied resource consent. The building had a remarkable design, they said, and while it made positive contributions to heritage character, many elements detracted from this. The commissioners also found that the building would significantly alter the setting around the church and that the proposal was contrary to the terms of the existing and proposed district plans.

Knowing that there would be substantial opposition, the trust had originally wanted to go directly to the Environmental Court. Undeterred by the finding, they filed an appeal with the court last month.

In late 2015, a scale model of The Olive Leaf was first displayed at St Patrick’s for the community to view. More than five years later, the struggle continues.

New Zealand has no local saints, but St Patrick has a connection with one: Mary MacKillop, or Saint Mary of the Cross. Born in Melbourne in 1842, MacKillop founded a religious congregation that established several schools in Australia and New Zealand, including Arrowtown, where she lived and worked. A historic cottage on the church grounds bears his name, and his legacy informs the design of The Olive Leaf.

MacKillop taught the value of extending an olive branch of reconciliation, architect Fred van Brandenburg said in a statement accompanying the 2017 resource consent application. She was also a proponent of progressive thinking.

“The olive leaf represents our cultural heritage as a legacy it leaves us on which we can build,” van Brandenburg wrote.

His design for The Olive Leaf, by comparison, is more down to earth.

“The design is meant to be and is a low structure so that it pays homage to the existing church, that’s the thrust of the design,” van Brandenburg told The Spinoff.

Heritage advocates, including Heritage New Zealand Pouhere Taonga, which opposed the proposal, disagree. They fear that The Olive Leaf will undermine the primacy of the church and that excavation and construction could damage the historic building. Van Brandenburg insists its design is complementary, but it’s also deliberately contemporary – not a dishonest imitation of the past.

“Just as the original church was cutting-edge architecture for its time,” he says, “I’m pretty sure the ancestors would encourage a new type of architecture to also create a splash, to have an impact. “

“Starchitecture” – this is how Hulls, the founder of NoLeaf, previously described The Olive Leaf, referring to the large, iconic designs of famous architects, or “stararchitects”. He and other naysayers have no problem with the design, they say; in fact many of them love it. They just think it’s inappropriate for the location.

“A lot of people don’t like change,” van Brandenburg says now. “No matter what is built on this site – they would rather not see anything.”

A symbol of peace divides a parish

The Olive Leaf is meant to be a parish hall for St Patrick. More than that, however, the trustees behind the project – including van Brandenburg, a local Catholic who designed the building pro bono – see it as a way to revitalize and bring new energy to the parish as well as engage the wider community.

This community, however, is completely divided by the proposal.

When it comes to The Olive Leaf, people with an opinion are vehemently for or against, Hulls says. There are no shades of gray.

During the month-long period when submissions were open at the end of 2018, 367 individuals and groups had their say (a handful of additional submissions arrived late). Of these, there were 150 submissions in opposition, 216 in favor and one requesting changes. Opponents noted that a majority of those opposing actually lived in Arrowtown, while many supporters came from out of town.

It has also divided opinion within St Patrick’s congregation, according to Tierney, the local estate agent and himself a practicing Catholic.

“You would have to say there is a relationship problem within the church.”

The proposal caused significant fallout, Tierney says, including damage to the Catholic Church’s reputation among lay residents. While the Olive Leaf Center Trust is independent of the Catholic Diocese of Dunedin, which owns the land, subsequent bishops have given their blessing for the trust to continue the project. The trust, however, has a responsibility to advance and fund the building, which it intends to do by soliciting donations.

Despite this distinction, Tierney says locals simply see the Catholic Church as promoting the project, taking advice and “trying to overthrow civil authority.”

“I am saddened to see that someone within the Church is hurting him more than anyone outside the Church.”

Bellett, the trust’s chairman, says the process has been frustrating.

Some opponents have spread misinformation and “fake news” about the project, he says, but the trust is confident it has a chance of winning resource consent through the environmental court.

“It’s been a five-year struggle just to get something that’s a gift for the community.”

A message of concern

In a statement provided to The Spinoff, Catholic Bishop of Dunedin Michael Dooley said he had given the trust his approval for the project, but noted that it was understood from the start that the diocese would not provide funding. financial support.

However, his support was dependent on board approval and consent, Dooley said. Prior to being contacted by The Spinoff, he was unaware of the environmental legal process.

“Buildings, whether old or new, seem to strike a chord with people,” he said, adding that it was a common problem across faiths.

“If these construction issues cause division within a parish community, as suggested, that is of great concern to me and we must address them.”

For the time being, the case will be dealt with by the courts.

Cool Spaces: from Gothic revival to townhouses – the architectural styles of New Brighton

They love cigars at a historic Tampa church