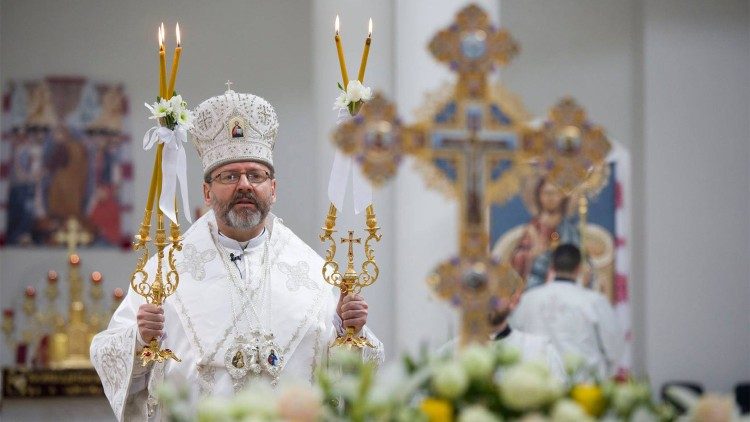 “Stay close to your herd”

Pope Francis addresses a letter to the Ukrainian Greek Catholic bishops as they hold their synod on the theme of synodality in Poland, and reiterates his closeness to the Ukrainian people in these difficult times.

By Lisa Zengarini
Pope Francis urged Ukrainian Greek Catholic bishops to be shepherds of their flock and to be close to the faithful entrusted to their care, giving them courage and hope.

Ukrainian bishops hold their annual synod to discuss the topic of synodality in their Church. The meeting, which runs from July 7-15, had to be moved from Kyiv to Przemysl, Poland, due to the ongoing war in Ukraine.

Recalling the recent Memorial Day of the Lviv Martyrs, who were raised to the altars in 2001 by Pope Saint John Paul II during his apostolic journey to Ukraine, Pope Francis noted that the current conflict renders the circumstances in which these priests, monks, nuns and lay people lived and died under the Soviet regime, even clearer to us today.

“Today, from Heaven, they protect their suffering people,” the Pope said, entrusting all Synod members to these martyrs killed by the communist regime in Soviet times.

Accompany the faithful
Reflecting on the theme of the meeting – “Synodality and Universality: Experience of the Ukrainian Greek Catholic Church”, Pope Francis underlined that the primary objective of the synod should be “the good of the Church and of each faithful”. .

“In addition, it must be a place of meeting and mutual aid on the path of common life, in the search for new means of accompanying the faithful”.

Bringing God and Hope to People
In this regard, Pope Francis recalled that pastors, as pastors of their flock, must be close to the faithful entrusted to their care and bring them “the living water of hope”.

The pope said, quoting his own words to Ukrainian Greek Catholic bishops during their 2019 visit to Rome, that people “don’t understand” their pastors if they want to talk “only about God”; but they understand if the pastors “are doing all they can to bring them God”.

“May the Church be the place where we reach hope, where we always find the door open, where we receive consolation and encouragement.

Pope Francis therefore expressed hope that the meeting could inspire Greek Catholic bishops in a “creative continuation” of “the extraordinary tradition of faith of the Fathers, rooted and sustained from generation to generation in the people of God.” from Ukraine.—Vatican News