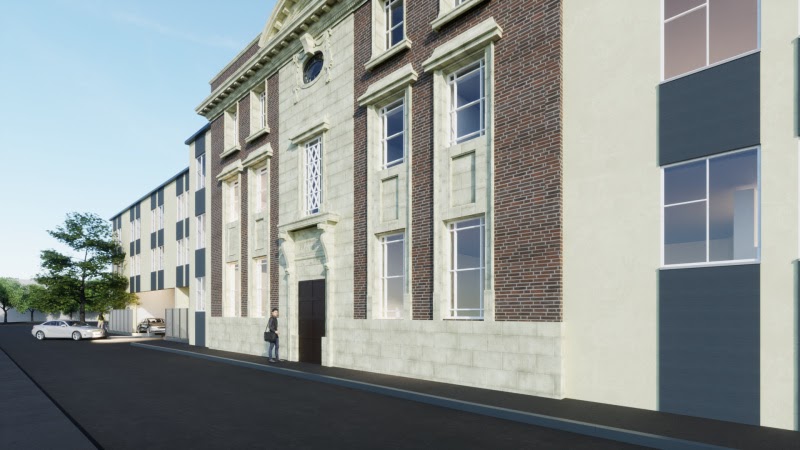 A historic office building in Rotherham town centre, recently used by a religious organisation, is set to be converted, according to new plans.

At the Moorgate end of town, on Grove Road, a handsome early 20th century building is set to be repurposed as 13 new flats according to a planning application submitted to Rotherham Council by Create Properties Ltd.

The building has been occupied by Hope Church, a community church, as well as being the home of Rotherham Foodbank. Both uses recently gained new premises elsewhere.

Also in the plans is 1,500 square feet of common amenity space that has the potential to be a gym or coworking space. Eight parking spaces in an existing underground parking area would be retained and a bicycle storage facility for ten bicycles would be added.

The main building, previously used as council offices, is described in the plans as: “An attractive early 20th century building of red brick and decorative stonework with ornate masonry. Above the main entrance is a date stone which indicates 1923. Although not a designated heritage asset, the building is certainly an asset to the street and wider surroundings.The mid-to-late 20th century extensions which adjoin the first decorative part of the building of either side, broadest to the west of the original 1923 building.”

Proposals include maintaining the beautiful central facade from the 1920s, restoring the lost sash windows on the ground floor. The building’s conversion improves the appearance of the 1960s extension, where the elevations have been modernized with updated buff brick and zinc finishes as well as upgrades to the glazing.

The plans add: “The proposals represent redevelopment that will make a significant contribution to achieving greater economic sustainability in the city. This will be primarily contributed by the investments represented which will manifest themselves in jobs created during and after construction, as well as the cumulative impact of enhancement of the surroundings of the site resulting from the proposals and the impetus for future regeneration that this is likely to help to create.

As the plans include fewer parking spaces than desired (Rotherham Council standards call for a maximum of one space per apartment, as well as 50% visitors), applicants will need to demonstrate that the site is close to good transport links. public transportation, public car parking and safe and convenient street parking.

The applicants also argue that residential development here “would not result in a significant increase in the number of vehicles maneuvering on Grove Road within the context of the current uses of Hope Church and Rotherham Foodbank”.