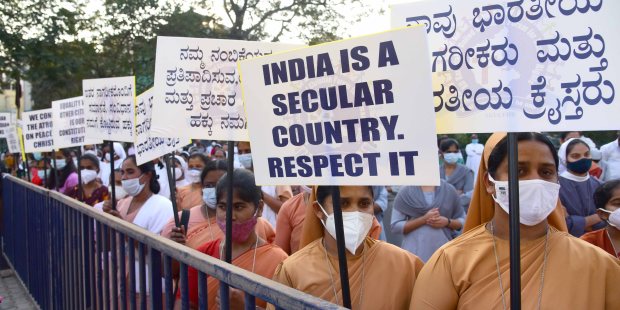 A state in southwestern India has become the 10th to enact “forced conversion” legislation.

A southwestern Indian state has become the latest to ban forced religious conversions.

The “Right to Religious Freedom Bill,” passed by the upper house of the state legislature, makes it illegal to convert by “force, undue influence, coercion, seduction or by any fraudulent means” or “by a promise of marriage”. According to its provisions, any person “victim” of attempts at “forced conversion”, his relatives or even an acquaintance can file a complaint.

Karnataka is now the 10th Indian state with anti-conversion laws.

The law carries a penalty of three to five years in prison, with heavy fines.

In the event of an accusation of forced conversion, the law establishes that the burden of proof is on the accused, according to Vatican News.

The bishops maintain that the law refers to social and educational activities promoted by the Church.

The law had the support of the local pro-Hindu party Bharatiya Janata (BJP), the party of Indian Prime Minister Narendra Modi.

In a statement, the Archdiocese of Bangalore said the Bishops of Karnataka, all Christian leaders and “others who defend the secular fabric of our democratic society ‘are considering legal challenges to the law,’ which they say is “bitter, harsh and abrasive.”

Fides reported last year that the bishops had expressed concern over restrictions that would limit or prevent the possibility of foreign donations to charities for India’s poor.

In May, Archbishop Peter Machado of Bangalore, head of the Karnataka Episcopal Conference, presented the Governor of Karnataka with a memorandum listing the reasons for religious minorities’ opposition to the legislation.

For its part, the local government maintains that the legislation will only protect people against forced conversions, arguing that they are becoming more and more frequent.

Karnataka, whose capital is Bangalore, borders several states, including Goa, which has a large Christian population. In Karnataka itself, Christians represent less than 2% of the population.

However, as Vatican News noted, India faces “growing intolerance against religious minorities, including Christians and Muslims, who have repeatedly been attacked on the pretext of illegally converting poor people from Hinduism.

India’s constitution provides for freedom of conscience and the right of all individuals to freely profess, practice and propagate their religion, according to the 2021 law International Religious Freedom Report, published by the Office of International Religious Freedom of the United States Department of State. It mandates a secular state; requires the state to treat all religions impartially; and prohibits discrimination based on religion.

It also stipulates that citizens must practice their faith in a way that does not harm public order, morals or health.

According to the 2011 national census, the most recent year for which disaggregated figures are available, Hindus make up 79.8% of India’s population, Muslims 14.2%, Christians 2.3% and Sikhs 1 .7%.

US Bishops: ‘A nuclear war cannot be won and must never be fought’