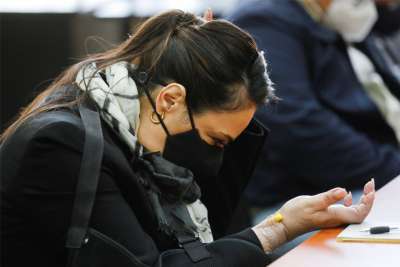 WASHINGTON — Ahead of the upcoming election season in Guatemala, the country’s bishops have said religious gatherings in the coming months “should not fall into the temptation to mix political propaganda with apparent prayer.”

Archbishop Gonzalo de Villa Vásquez of Guatemala City, surrounded by brother bishops at a press conference July 20, said that in “the world of the countryside in Guatemala…there is a distortion” of ideas and goals that mix during political campaign seasons.

“We call on people to take this seriously and reflect” and not get carried away by others, Bishop Villa Vásquez said, responding to a question.

Guatemala has general elections next June.

Along with the rest of the Guatemalan bishops’ conference, he spoke of the deteriorating situation in the country, citing malnutrition, corruption, the dismantling of democracy and violence as reasons for the increasing exodus of the country’s population.

“Our countries are not creating the kind of conditions for a dignified life,” Guatemalan Bishop Domingo Buezo Leiva of Sololá-Chimaltenango said during the press conference, transmitted via YouTube.

He said deteriorating conditions led to the deaths of Guatemalans in Texas, who were among 53 migrants who died abandoned by smugglers in a sweltering trailer near San Antonio in June.

As the bishops addressed the issues in Guatemala, they also said it was not a condition limited to the country, citing similar events in neighboring El Salvador and Nicaragua. In Guatemala, “political corruption, irresponsibility, interests and political myopia of officials” at different levels of government “corrupted the system, they abused it and created a dysfunctional state unable to fulfill its function of producing good common,” the bishops said in a statement.

This is why so many Guatemalans are choosing to leave, in search of better conditions, Bishop Buezo said.

They are witnesses, the bishops said, of a world in which “geopolitical hegemonies prevail that neither promote the common good nor the minimum well-being of people and their human dignity.”

The day after the document was released, Kevin López, social communications secretary in the Guatemalan president’s office, said the government disputed what was said, adding that the document was “full of rantings,” pedantic writing.

The country’s incumbent president, Alejandro Giammattei, is being investigated over allegations that he received bribes from Russians. Prosecutors investigating the allegations had to go into exile.

With their statement, the bishops appeared to call on Guatemalans to fight for peace and justice in the country.

Guatemala, they said, ranks last in Latin America in terms of human development, but the country ranks first in levels of child malnutrition, as well as violence.

“Real and effective policies have not been promoted in favor of the indigenous people, but neither in favor of the transparent application of justice,” the bishops said, adding that previous governments have drawn up short-term plans to solve them and only “for electoral reasons”. ends.”

Through listening sessions in preparation for the Synod of Bishops on Synodality in 2023, the bishops said they were able to hear the sufferings, life experiences and dreams of Guatemalans. They said that while Guatemala finds itself in a perilous position that continues to deteriorate, citizens working for the government, whether or not they believe in a higher power, must exercise moral and ethical actions in their work for the audience.

Guatemalans, in turn, should not lose hope of building peace in the country, they said.

“God calls us to provide justice, to defend human life…especially the most vulnerable,” the statement said.

Irony of the Bishops of Tinubu / Shettima

Bishops must be good listeners, says Vatican nun who helps select them