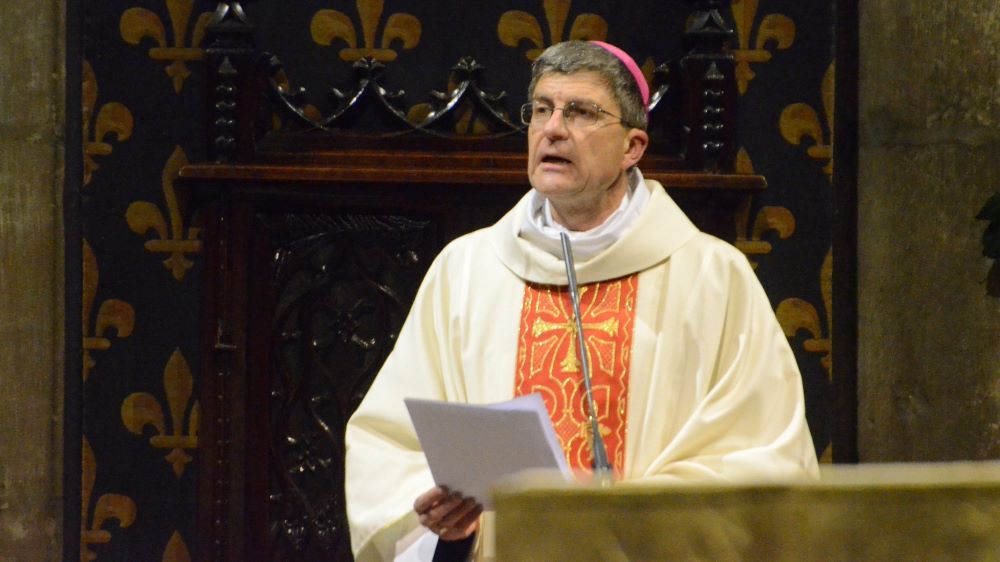 Eric de Moulins-Beaufort was ordained a priest on June 29, 1991 for the Archdiocese of Paris, and was successively appointed chaplain of Collège Montaigne (1992-1993); director of the Séminaire de Paris and teacher at the Cathedral School and the Séminaire de Paris; and chaplain at Lycée Louis-le-Grand (1993-1995). He was then pastor of the parish of Saint-Paul and Saint-Louis (2000-2005).

In 2005, he became private secretary to the Archbishop of Paris, Mgr. André Vingt-Trois, until 2008. From 2009 to 2011, he was extraordinary professor at the Notre-Dame Faculty and at the Studium du Séminaire de Paris. In May 2008, he was appointed auxiliary bishop and vicar general of Paris, consecrated bishop on September 5, 2008. Then, appointed archbishop of Reims on August 18, 2018.

During his first mandate, Bishop de Moulins-Beaufort believed he could resolve the crisis of sexual abuse in the Church with the establishment of the Sauvé commission and the publication of its report with questionable and disputed conclusions. In addition, during the Covid-19 pandemic, it imposed a series of drastic health restrictions for the exercise of worship and participation in Sunday masses.

On December 6, 2021, Eric de Moulins-Beaufort received the Legion of Honor from Gérald Darmanin. The Minister of the Interior and Religious Affairs then praised “the courage and determination” of the newly decorated, as a man “of conviction and dialogue”, “in the face of the difficulties encountered by the Church concerning acts of pedophilia”.

The primacy of ecological conversion

During his closing speech to the Plenary Assembly of the Bishops of France, on April 8, 2022, Bishop de Moulins-Beaufort dwelt at length on “the climate emergency and the urgency of the measurable degradation of biodiversity”. Evoking interdependence, he united “the love of Christ which urges us” with the obligation “to draw closer to distant brothers and sisters, the first, who suffer and will suffer from the effects of climate change”.

He underlined the importance of “seeing that the least of our actions: feeding us, dressing us, moving us, informing us, bringing us together, triggers a series of causes, many of which permanently damage the ‘common home’”. So it is. the bishops to continue their “ecological conversion” [sic] with the dioceses and parishes, that “we will carefully follow our collective journey”.

Denounce the “ecological sin” [sic]Bishop de Moulins-Beaufort maintained that the original goodness of God in his creation “is polluted and disfigured by the needs of our societies, by the capture exercised by the richest societies and the richest individuals in various societies”.

“In addition to our personal faults of waste or excess consumption, for example, we belong to structures of sin… We want to proclaim to all that other ways of living as humans are possible and that ‘they can be joyful, uniting us more to our Creator and Saviour.

To better understand what ideas haunt the mind of Mgr. of Moulins-Beaufort, it is useful to return – as we have already done (see reference below) to the study published in the New Theological Review [New Theological Review] of April-June 2019 (Volume 14, n°2), where the French bishop explained how, according to him, the Church had to face the challenges of the 21st century.

We reproduce freely some excerpts from the article published three years ago, during the first election of Bishop de Moulins-Beaufort as head of the French Episcopal Conference. It is still current.

The solution to the crisis caused by the massive dechristianization of France is, according to Bishop de Moulins-Beaufort, to be sought from the point of view of Vatican II: “Other [thinkers]more subtle, perhaps also more lucid [than supporters of a restoration which he describes as illusory]propose an interpretation based on the Second Vatican Council.

Among which the president of the CEF distinguishes a name: “The most important French-speaking author on this subject is undoubtedly the Jesuit Christoph Theobald. In particular, in 2017 he published a book entitled Urgences pastorales [Pastoral Crisis] (Bayard).

“Here is the proposal of this author, considered significant by Bishop de Moulins-Beaufort: “While the Church and the world seem to be moving away inevitably, Father Théobald establishes a point of convergence or possible meeting, in a “faith elemental, attached to the fundamental goodness of life”, the deployment of which is necessary for the pursuit of each individual existence, a faith whose appearance is never guaranteed in the face of trials, and from this he tries to understand the mission of the Church.

“After the considerable work of evaluation and recovery of the concept of ‘mission’, he proposes that ‘mission’ be understood as ‘service to the life of others’, ‘humble hospitality’, making available to all the riches of Christ, without a spirit of recuperation.

Hence this recent – ​​and minimalist – reminder to Lourdes: “to bring us close to distant brothers and sisters, the first, who suffer and will suffer from the effects of climate change”. Hence also this insistence: “seeing that the least of our actions: to eat, to dress, to move, to get information, to meet, triggers a series of causes, many of which permanently damage the ‘common home’. Hence, finally, the need for “ecological conversion” and the fight against “ecological sin”

Clearly, especially not a restoration as Saint Pius X wished [instaurare omnia in Christo, “to restore all things in Christ,” Ep. 1:10], but the proposal of an “elementary faith attached to the fundamental goodness of life”, a very small common denominator for all in an advanced liberal society, where the mission of the Church is to be humbly hospitable, “without a spirit of recovery. ” As Francis often says: “No proselytism!

We are far from Jesus Christ sending his disciples on a mission in a pagan society: “Go therefore, teach all the nations; baptizing them in the name of the Father, and of the Son, and of the Holy Spirit. Teach them to observe all that I have commanded you, and behold, I am with you always, even to the consummation of the world. (Mt 28:19-20)

Msgr. the apostolic timidity of Moulins-Beaufort is the reflection of the attitude of many French bishops; it is expressed in the article of the Nouvelle Revue Théologique with infinite precautions: hypotheses, euphemisms, euphemisms… No statements that are too clear! Nothing is catastrophic, everything is a “challenge”!

Thus of Islam: “It must be understood that France has always been more diverse than the French know or feel. Islam adds another complication. It seems to me that, in a country like ours, we face a double challenge:

“Can Islam cultivate brotherly relationships, even in jealousy or competition, without necessarily aiming to absorb everyone? [As Moliere says in “The Misanthrope,” Act I, scene ii: “Ah! In what gallant terms these things are phrased!”

“Can Islam nourish the experience of liberty in the personal dignity that is the best of our lived experience in our countries, and that is the chief quality of fervent Catholics? [In other words, when will Islam carry out its conciliar aggiornamento by adopting Dignitatis Humanae?]

We understand better why, last year, Bishop de Moulins-Beaufort received the Legion of Honor from the hands of the Minister of the Interior and Religious Affairs, who hailed “the courage and determination” of a man “of conviction and dialogue”.