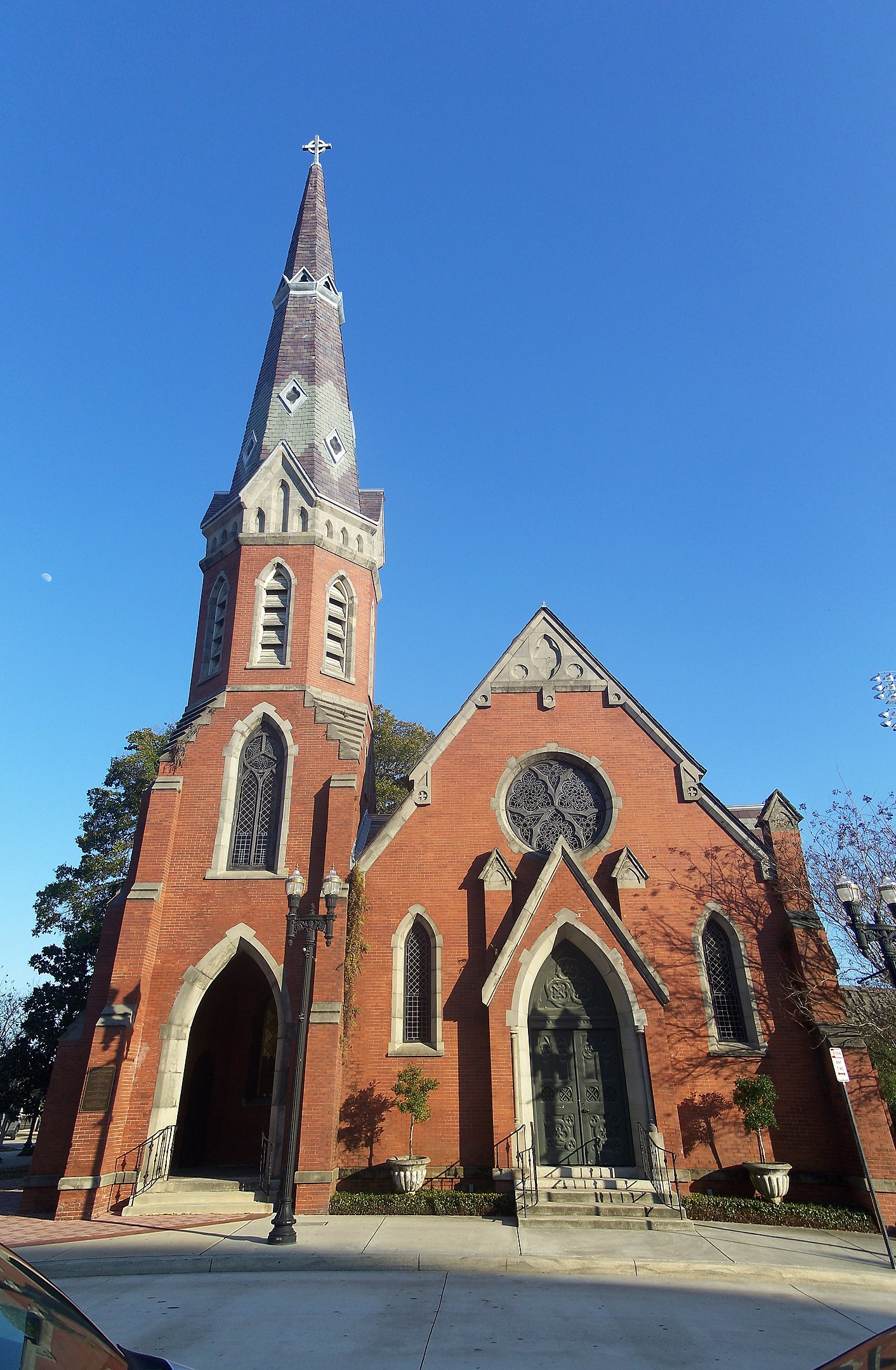 The Old St. Andrew’s Church building at 317 A. Philip Randolph Boulevard may at first glance seem a bit out of place in Jacksonville’s modern downtown sports district. But in fact, he was there long before anything else.

The building was constructed in 1887 and opened in 1888 as the new parish church of St. Andrew’s of the Episcopal Diocese of Florida. It was built on land at the corner of Duval Street and Florida Avenue (the original name of A. Philip Randolph Boulevard) donated to the parish by John NC Stockton, who led the development of the Ortega neighborhood and whose brother, Telfair Stockton, played a major role in the development of St. Mark and Avondale.

The Gothic Revival style design of the St. Andrew’s Church building was by architect Robert S. Schuyler, known for designing similar churches across Florida. Its exterior was adorned with red brick and sandstone trim; its distinctive steeple rose to a peak of 120 feet and featured asymmetrical openings. Its interior could accommodate 150 people.

St. Andrew’s Church was the only church known to have survived the Great Fire of 1901 that tore up downtown Jax.

The church operated for several decades, but by the 1950s the surrounding Eastside neighborhood was changing rapidly, becoming a hub of major urban projects like a new stadium and the coliseum, and urban decay caused by socio-economic change. the church closed in 1957choosing to move through the Mathews Bridge at Arlington.

The property sat vacant and began to decay, to the point that concerns were raised about the viability of any preservation projects involving the aging church structure. It was added to the National Register of Historic Places in 1976, but continued to decline through the 1980s and early 1990s.

In 1994, the city acquired the church property along with much of the surrounding land for $73,650. The city entrusted the church building to the local nonprofit Jacksonville Historical Society for restoration and reuse.

The organization embarked on a million-dollar public-private redevelopment project, led by then-JHS director Matt Carlucci and local architect Ted Pappas. The project spanned two years, beginning in 1996 and culminating in its reopening as the headquarters building of the Jacksonville Historical Society in 1998.

The organization has since moved its offices to another historic property, the Old St. Luke’s Hospital building, but it keep working the St. Andrew’s Church building as the event venue. He even hosted a superbowl party in 2005.

Since its restoration, the building has added two major new neighbors: Baseball Grounds of Jacksonville and VyStar Memorial Arena. And with the addition of Intuition Ale Works and future mixed-use development on the site of the Doro Fixture Co. building and shipyards, the 132-year-old structure may soon find itself in the middle of a revitalized sports district.