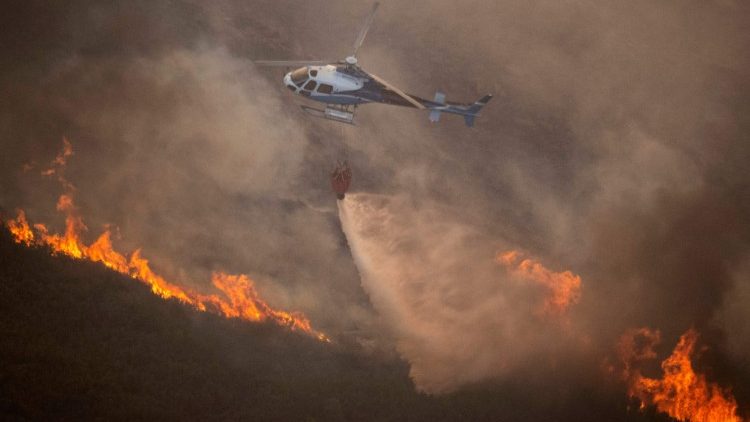 In a message for the next Season of Creation, Albanian Archbishop Angelo Massafra of Shkodër-Pult, a member of the Pastoral Commission for Social Welfare of the Council of European Bishops’ Conferences (CCEE), echoes the call of the Pope Francis to an ecological conversion, recalling that the current climate crisis is mainly attributable to the actions of man.

By Lisa Zengarini
As the Church prepares to celebrate the Season of Creation, from September 1, World Day of Prayer for the Safeguarding of Creation, to October 4, 2021, Feast of Saint Francis of Assisi, Patron of Ecology, the European bishops join Pope Francis in calling for ecological conversion to protect and preserve our common home from destruction, and in particular calling on Christians to be “spokespersons” for what the planet demands.

“Listening to the voice of creation”
The Season of Creation is celebrated annually by Christian churches around the world as a time of prayer and action to safeguard our common home through responsible stewardship. It is a time of grace that the Church, in ecumenical dialogue, offers to humanity to renew its relationship with the Creator and with Creation, through celebration, conversion and commitment to action.

The theme proposed this year is “Listening to the voice of creation” and the urgency to do so is symbolized by the “Burning bush” (Ex. 3, 1-12), referring to the prevalence of unnatural fires as a sign of the devastating effects that climate change is having on our planet’s most vulnerable.

Fires in Europe
“In particular, our European continent has been confronted with a real environmental catastrophe which, in 97% of cases, is attributable to the actions of man,” says Bishop Angelo Massafra OFM of Shkodër-Pult, member of the Pastoral Protection Commission of the Council of European Episcopal Conferences (CCEE).

“According to a recent estimate, in the 27 countries of the European Union, fires have already devastated a total of 517,881 hectares since the beginning of the year, compared to 470,359 the previous year”, writes the president of the Conference Albanian episcopal in a press release. message for annual celebration.

“It is worrying that researchers are already hypothesizing the passage of our era (Anthropocene) to the next, to which they have already given the name of “pyrocene”, the effects of which are already visible given that CO2 emissions reached levels the planet has not seen in well over 3 million years.

The “incalculable” damage of wars on the environment
In his message, the Prelate also draws attention to the “incalculable” damage to the environment caused by wars, namely the conflict in Ukraine as well as in other regions of the planet. He remembers, in particular, the war in Vietnam in the 1960s when American forces sprayed massive amounts of defoliants and herbicides, including napalm, on rural areas of South Vietnam in an attempt to starve Vietnamese guerrillas of food. and vegetation, causing what has been called “ecocide”.

He also cites the heavy air pollution caused by the burning of oil installations in Kuwait during the first Gulf War against Iraq (1990-1991) and, more recently, the wars in Yemen and Syria with the contamination of soils and waterways.

Referring to the ongoing war in Ukraine, Bishop Massafra notes that experts currently believe that the long-term effects of this conflict can cause cancers, respiratory diseases and developmental delays in children.

Message from Pope Francis for the Season of Creation
In this context, the Albanian Prelate remarks that “if the hand of man is the main cause” of the current global ecological crisis, “the same hand” can find a solution to it, as the Pope has repeatedly requested Francis, and reiterated this on July 21 in his Message for this year’s Season of Creation.

In this message, the pope asked UN members for the “effective implementation” of the 2015 Paris agreement on climate change. The Pope’s message, says Bishop Massafra, was “not a pious exhortation”, but “a real challenge launched to the powerful of the Earth and to the leaders of the different nations (whether rich or poor), each for his part “. ”

Bishop Massafra’s message therefore ends with the hope that the World Day of Prayer for the Care of Creation, September 1, can be “a time of prayer, but also a time of serious conversion of individual attitudes and habits. “.

“We, European Bishops, join in the appeal launched by Pope Francis, inviting all Christians to be spokespersons for these demands of the Planet, whose voice reveals ‘a kind of dissonance’. On the one hand, we can hear a sweet song in praise of our beloved Creator; on the other, an anguished plea, deploring the mistreatment we inflict on our common home”.—Vatican News