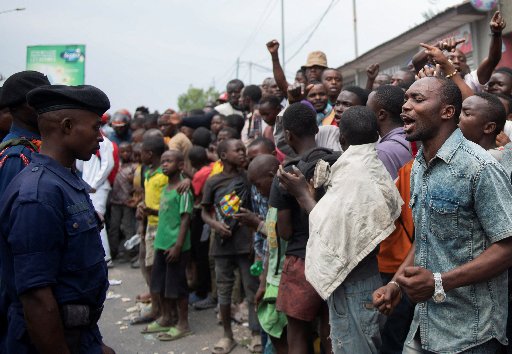 The secretary general of the Congolese bishops’ conference has offered the help of his church to restore dialogue after the deaths of dozens of people during protests against the ineffectiveness of UN peacekeepers.

“The international community seems utterly ignorant of the extent of the inhumanity here – why is it so silent and inactive?” says Msgr. Donatien Nshole Babula.

“He doesn’t seem to understand that (Congo’s) sovereignty has been denied and attacked for years, and that we can never escape this turbulence as long as armed groups deliberately seek to destabilize our country.”

“The Congolese people feel totally abandoned, both by those in power and by those who came here with the mission to defend them. I can understand the loss of popular trust that fueled this confrontation.

The Kinshasa-based priest made the comments following violent protests against members of the UN-backed multilateral stabilization mission in Congo, known by the acronym MONUSCO.

In an Aug. 4 interview with Catholic News Service, Nshole said appeals for peace from Congo’s Catholic bishops had helped calm the situation, adding that church demands for an investigation into the violence were being followed.

“The protests, provoked by MONUSCO, have diminished in their level of violence – it seems that the voice of the church has been heard,” Nshole told CNS.

“MONUSCO is now in dialogue with the government and civil society organizations, discussing the proposed solutions. These are all things that we have asked for.

At least 36 people were killed and 170 injured in a series of attacks in late July on MONUSCO bases in the eastern provinces of Ituri and Kivu. Protesters were angered by the UN mission’s failure to provide protection against armed groups.

Troops from the 14,000-strong mission, deployed since 1999, opened fire on civilians at a border post in Kasindi, while four blue helmets were killed during a riot in Butembo.

In mid-July, MONUSCO spokesman Matthias Gillmann told Radio France International that 400 MONUSCO soldiers had died during the 23-year mission alongside Congolese government forces. He said one of the main rebel groups, the M23, “now had firepower and equipment”, including machine guns, long-range mortars and anti-aircraft weapons that were beyond the army’s military capabilities. ‘UN.

On August 4, Congo asked Gillmann to be expelled from the country, RFI reported.

In a July 27 interview with his diocese’s Catholic Radio Moto, Bishop Melchisedec Sikuli Paluku of Butembo-Beni called for new negotiations between the UN and the Congolese government, adding that he feared “the whole city” otherwise rebellious.

Meanwhile, the bishops’ conference has demanded immediate investigations into the causes of the violence and called on politicians and community leaders “to refrain from speech that could further stir up hatred”.

“We believe that the government and MONUSCO have shown the limits of their mission to ensure the security of populations exposed to armed attacks,” said the July 27 statement, signed by the president of the conference, Bishop Marcel Utembi Tapa of Kisangani. .

“But resorting to violence or looting can only amplify and perpetuate evil, as well as public suffering.”

Patrick Muyaya Katembwe, government spokesman, told the media on August 2 that public confidence in UN peacekeepers was now “broken”, adding that the government would insist on MONUSCO’s withdrawal from the country.

Nshole said he believed the UN mission was still needed in eastern Congo, but added that the church was ready “to facilitate dialogue to reassess its role” in light of the request from the government.

“The whole population was disillusioned, alone and particularly vulnerable,” he told CNS.

“What we desperately need now are bold steps to restore confidence in the face of unending aggression by armed groups. This remains the essential message of the church.

The Catholic Church, which accounts for two-thirds of Congo’s 67.5 million people, has long been involved in peace efforts across the African country, where around 5 million people have been displaced by fighting, according to UN data.

Bishops of Eldoret at the IEBC: Make sure the polls are credible