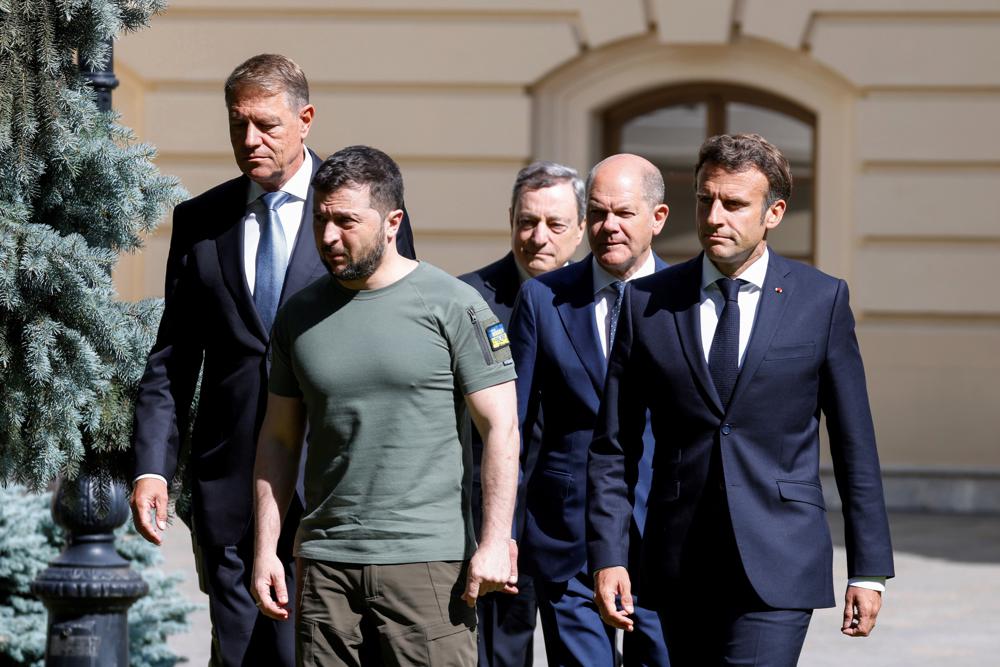 ROME – On the same day the European Commission issued its recommendation to grant Ukraine official status in the European Union, Europe’s bishops urged leaders to develop a realistic enlargement plan that includes the war-torn country as well as others who have long been on the waiting list.

In a June 17 statement, the Commission of Episcopal Conferences of the European Union (COMECE) said the war in Ukraine has not only caused immeasurable suffering to innocent people, but has also “greatly called into question the vision of a rules-based international order” and has “shaken up the whole security architecture in Europe and beyond”.

The bishops condemned what they called an erosion of multilateralism, a diminishing respect for human rights and the values ​​of peaceful coexistence, and a rise in the logic of a “great power confrontation.”

They suggested that the European Union has been weak and, so far, ineffective, saying that despite the EU’s aspirations to become a stronger global player in the pursuit of peace, member states “have failed often not been able to find the unity needed to make decisive decisions”. and consistent actions, due to indifference, naivety and the predominance of particular economic or national interests over the common good.

This has been especially evident during the COVID-19 pandemic, the bishops said, insisting that the coronavirus and Russia’s invasion of Ukraine “have held up a mirror to us,” making leaders of the EU “how crucial its role is to provide new life”. strategic vision for stability, justice and peace for the European continent and for the world.

Despite their criticisms, the Bishops also commended the EU and its 27 Member States for the support they have given to Ukraine and its people, and they urged the EU and the wider international community to continue their efforts “for an end to the war, with a free, secure and independent Ukraine within its internationally recognized borders”.

“While a lasting peace will only be possible on the basis of a negotiated agreement, Ukraine’s right to self-defense in accordance with the principles of international law cannot be denied,” they said.

They called for the construction of a “new architecture of peace” in Europe and in the world, “with a basis of solid values ​​as well as respect for human dignity and the human rights of each person at its heart”.

To this end, the Bishops urged European leaders and decision-makers to renew and implement their commitment to “a credible EU enlargement process” that includes all European countries that have submitted an application, “including including the opening of accession negotiations with Albania and North Macedonia”. and the granting of candidate status to Ukraine.

The bishops’ request came the same day the European Commission, led by German politician Ursula von der Leyen, issued a recommendation for Ukraine to gain EU candidate status, marking the first step in a long road to full membership for the war-torn country. .

However, von der Leyen, in his statement on Friday, said the recommendation was made on the understanding that Ukraine is making several reforms, as admission is a “merit-based” process.

Ukraine’s admission to the EU was apparently supported by Pope Francis during his meeting with von der Leyen at the Vatican on June 10, according to a small group of Ukrainians who met the pope and asked him to intervene in the case.

The European Commission’s recommendation on Ukraine will now be discussed by EU leaders at a summit on June 23-24 in Brussels. The launch of accession negotiations requires the approval of each of the 27 member countries.

In its statement, COMECE also urged EU leaders to develop a peace strategy based on “a comprehensive definition” of peace that will help reinforce “an integral approach” to the promotion of peace and security. and to strengthen civilian peacebuilding policies with the aim of effectively preventing the outbreak of future violent conflicts.

EU leaders were also encouraged to strengthen multilateralism by fostering “value-based multilateral and multi-stakeholder partnerships” that adequately respond to regional and global challenges such as the current food and energy crises, as well as global change. climate change and the reconstruction of Ukraine.

At the same time, these partnerships must also “reduce dependence on undemocratic regimes by diversifying supply chains and ensuring their sustainability and ethics,” the Bishops said.

They called on EU leaders to engage “responsibly and collaboratively” on security issues by developing “adequate European defenses as part of a comprehensive approach”, while ensuring “monitoring strict public compliance with the principles of proportionality, adequacy, as well as respect for human rights, the rule of law and ethical standards.

COMECE also called for the transformation of international relations with the aim of creating “a truly global community, with a more effective UN at its heart and stronger multilateral cooperation to ensure accountability for international crimes”.

In a background paper provided with its statement, COMECE welcomed the EU’s contribution in terms of global humanitarian aid and developments in agricultural, trade, human rights and development policies, but criticized what she called “inconsistencies” in arms exports by some EU member states, which they say is a factor preventing the EU “from effectively promoting peace through justice” .

In an increasingly distrustful and divided world, the EU’s role, they said, should mirror what Pope Francis called for in his 2020 encyclical Fratelli Tuttiwhich says that “real and lasting peace will only be possible on the basis of a global ethic of solidarity and cooperation in the service of a future shaped by interdependence and shared responsibility throughout the human family”.

The EU, the pope said, must “rediscover the path of brotherhood” and “work together to overcome divisions and foster peace and brotherhood among all the peoples of this continent.”