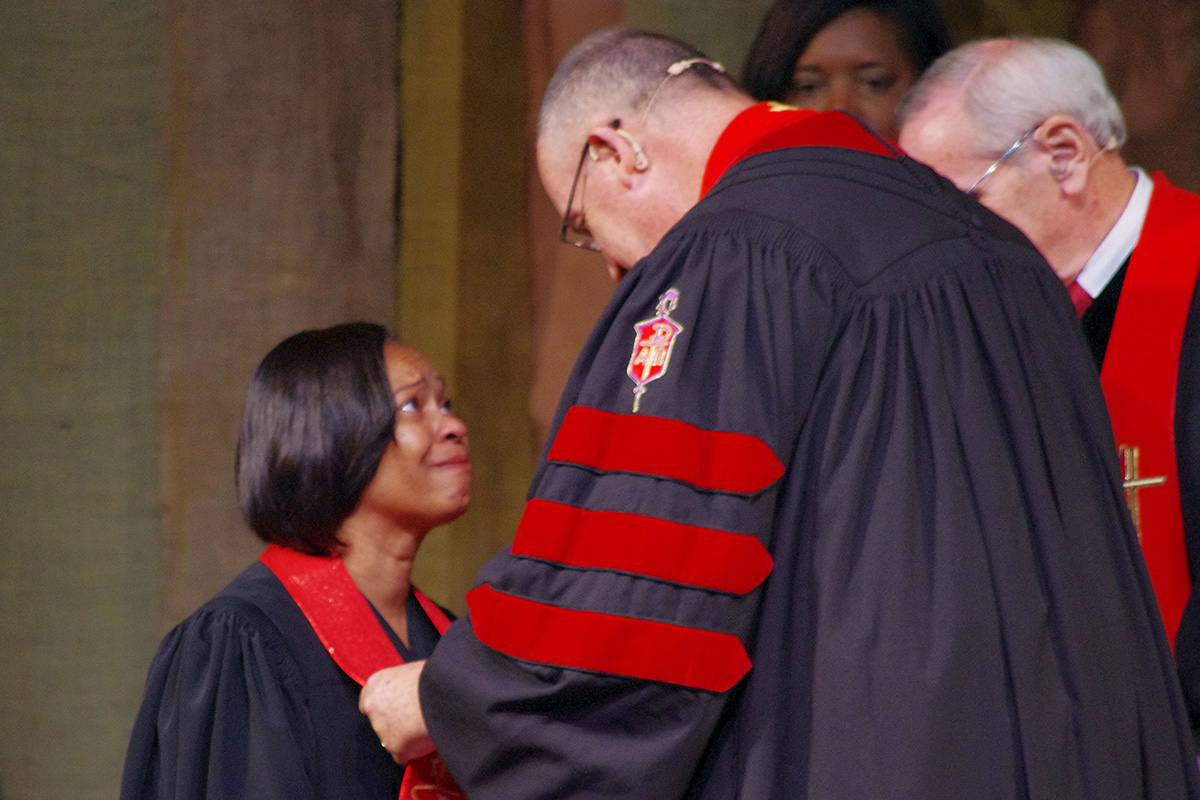 The new bishops elected this fall will take leadership as the denomination grapples with the fallout of the COVID-19 pandemic and suffers a fracture not seen in the current life of The United Methodist Church.

Even amid these challenges, the current bishops also used the last day of their meeting to celebrate how United Methodists are overcoming internal conflict to follow the example of Christ.

Bishops heard how the United Methodist Committee on Relief, the denomination’s disaster response arm, has now received more than $27 million to help those affected by Russia’s invasion of Ukraine .

They also learned more about the #BeUMC campaignwhich is why many people continue to live their faith as United Methodists.

Council of Bishops President Thomas J. Bickerton had a message for all who remain with The United Methodist Church: “We are in this together.

“It could easily be labeled as a superficial phrase,” he acknowledged. “But in reality, it is a phrase that sits at the heart of my soul and is the fundamental source of my belief in the blessed connection of our United Methodist Church.”

The Council of Bishops originally scheduled the Aug. 22-26 meeting to coincide with General Conference, which was then set for late summer this year.

However, COVID-related complications have since delayed the denomination’s international legislature until 2024, to allow delegates from four continents to obtain the necessary visas to meet in person.

The much-delayed General Conference faces multiple proposals for some kind of denominational divide after decades of intensified debates over same-sex marriage and same-sex ordination.

But after the assembly was postponed for the third time, World Methodist Church organizers decided the theologically conservative denomination would begin operations in May – but with no separation plan in place.

This has left bishops grappling with growing church disaffiliations and also led them to seek clarification on whether to schedule new bishops’ elections, which usually take place every four years after every general conference. Since COVID first forced the postponement of General Conference in 2020, 16 active bishops — mostly in the United States — have accepted expanded assignments to cover retiring or ill colleagues.

The Council of Bishops has announced plans to maintain episcopal leadership in parts of the connection where new bishops will not take office for some time.

Episcopal leaders in Africa have announced that no new bishops will be elected on the continent until the end of General Conference, now scheduled for 2024.

Retired Bishop Warner Brown, former President of the Council of Bishops, will remain acting Bishop of Sierra Leone until 2024 when new elections will be held. Brown has led the Sierra Leone Conference since the late Bishop John K. Yambasu was killed in a car accident in 2020.

The Council of Bishops also approved that retired Bishop Deborah Kiesey will continue to lead the Conference of Dakotas through the end of this year.

Kiesey led the Iowa and Dakotas conferences while Bishop Laurie Haller was on sick leave. Haller plans to return to active ministry Oct. 1 and lead the Iowa conference. However, she announced on August 29 that she planned to retire at the end of the year.

UM News: Bishop urges to end the lies and look to the future.

The Judicial Council – the denomination’s high court – ruled this spring that with bishops so stretched, new elections must be held to ensure the continuation of the episcopate.

Jurisdictional conferences hold episcopal elections in the United States, and central conferences hold them in Africa, Europe, and the Philippines. But no matter where the elections are held, half of the voters are lay people and the other half are clergy. Bishops preside over conferences and do not get votes.

Because they only involve people from a single geographic region, jurisdictional and central conferences face fewer logistical hurdles to convening than the global General Conference.

All five U.S. jurisdictional conferences plan to elect bishops November 2-5 this year. The Philippine Central Conference has scheduled its gathering for Nov. 24-26. The Central Conference of Central and Southern Europe plans to meet November 16-20. The newly elected bishops will take office on January 1, 2023.

It remains to be seen how many new bishops the delegates will elect.

The most recent denominational budget, approved by the 2016 General Conference, allocated funding to a total of 46 bishops in the United States and 20 in central conferences.

Outside the jurisdictions, the Philippines plans to elect three bishops and Central and Southern Europe only one.

However, amid denominational uncertainty and years of trying to bolster funding for bishops, at least some U.S. jurisdictions are considering electing less than the maximum allowed.

The south-central jurisdiction plans to elect three new bishops, rather than a potential four.

The north-central and northeastern jurisdictions have not yet indicated the number of bishops they plan to elect.

Ultimately, the delegates of each jurisdiction will themselves determine the number of elections to be held.

Looking ahead to 2024, Haupert-Johnson said the Southeast Jurisdiction is considering a major overhaul of the court system.

“We would like to lead the whole church in the possible interruption of jurisdictions,” she said.

The Jurisdictions formed in 1939 as part of the merger that created what was then the Methodist Church. The system was intended to enforce segregation in the denomination and prevent northern Methodists from voting for southern bishops and vice versa.

The situation has changed a lot since then. Today, Haupert-Johnson said, some annual conferences might be more compatible by working together across jurisdictional lines.

“And we also wanted to end one of the last visible vestiges of racism in our denomination,” she added.

For now, the bishops are focusing on shorter-term possibilities.

The Council of Bishops plans to have an orientation session for new bishops in mid-January in Dallas.

Bishop Grant Hagiya, who leads the California-Pacific and Desert Southwest conferences, said the orientation will include discussions about the global nature of the denomination, an overview of legal issues facing the denomination and guidance for organizing the annual conference meetings. New bishops will also receive training on combating sexism and racism.

Hagiya stressed that the orientation sessions would include worship and prayer.

Bickerton, the president of the Council of Bishops, told UM News that episcopal candidates should understand what they will face if elected.

“These are unusual times that require excellent leaders who will not only need to quickly understand the complexity of the current context, but also help lead the church into its next expression,” said Bickerton, who leads the New York Conference.

Even with all the naming challenges, several Episcopal candidates have already thrown their hats into the ring.

Bickerton said it’s important for anyone considering the role to remember that they are not only called to serve the people who elected them or even the annual conferences they lead.

“We are called to be bishops of the whole Church who enter into a model of collaborative ministry with bishops around the world,” he said.

“Finally, anyone considered for the position should clearly ask themselves, ‘How am I doing with my soul and how can I stay spiritually centered and healthy as I potentially step into this critical leadership role?'”

Hahn is an associate editor for UM News. Contact her at (615) 742-5470 or [email protected]. To read more news from The United Methodist Church, subscribe for free to the Digests of the day or Friday.