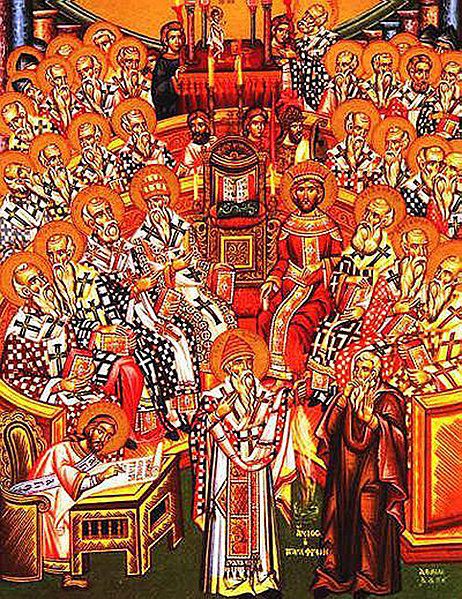 Paul spoke to the elders of Ephesus, explaining to them that their authority in the church should be exercised for the good of the people, and not for their own personal gain:

Take heed to yourselves and to all the flock over which the Holy Spirit has made you overseers, to care for the Church of God which he has obtained by the blood of his own Son. I know that after my departure fierce wolves will come among you, not sparing the herd; and from among you shall arise men who shall speak perverse things, to draw away the disciples after them. So be vigilant, remember that for three years I kept warning everyone night and day with tears. And now I commend you to God and to the word of his grace, which can edify you and give you an inheritance among all the sanctified. I didn’t covet anyone’s money, gold or clothes. You yourselves know that these hands ministered to my needs and to those who were with me. In all things, I have shown you that in working like this, you must help the weak, remembering the words of the Lord Jesus, how he said: “It is more blessed to give than to receive” (Acts 20 :28-25 RSV).

Bishops, priests and other clergy should be good pastors, seeking to help the Church, doing what they can to protect their flock from evil, that is, from various evils, including and especially the evil that could come from themselves. If a bishop exercised his authority for his own benefit, he would scandalize the faithful and, instead of acting as a faithful shepherd for his flock, he would act like a ravenous wolf pursuing an easy prey.

A bishop must not use false pretenses to criticize and harm one of his faithful. If they did, their injustice would cause great scandal. People would be confused about what they saw happening and would ask questions, indeed some might end up questioning their faith, thinking that if what the bishop was doing represented faith, they would want nothing to do with it. do with that. If and when this begins to happen, the bishop should see where they went wrong and correct their error; if, on the contrary, they try to defend themselves by using faulty logic to do so, they only increase the harm they have caused, for their claims will certainly lead many astray.

Thus, a bishop should not use his power to criticize and insult someone he does not like, accusing him of doing something he has not done. Nor should they ignore proper distinctions, confuse what should not be confused, such as suggesting that all intrinsic evils are grave evils, for when they do this ordinary people become confused and follow the suggested distortions. Heresy forms from such confusion, and if heresy is not quickly stopped, it can cause great trouble in the church. This is exactly what we saw happen during the Air Crisis.

One of the problems with Arius, and those who followed his teaching (which included many bishops), was the way he interpreted the begetting of the Son by the Father as indicating that the Logos was a contingent being. Once the Son turned out to be a contingent being, Arius then said that meant the Son was not eternal, meaning the Son was not God. Through the chaos and strife that Arius and his followers brought to the church, Christian unity was torn apart. To deal with the problem, Constantine and his advisers suggested that the Christian hierarchy come together and establish a unified presentation of the faith. And so Constantine called the Council of Nicaea in 325. At that, the council established the Nicene Creed, presenting the way they thought was best to express the relationship between God the Father and God the Son, showing how they are both divine and yet distinct from each other. They believed it was necessary to use the term homoousios“of the same being or essence”, in the creed as a means of explaining this relationship, since by its use they could indicate that the Father and the Son (and also the Holy Spirit) were also God.

The term homoousios was deemed necessary because, when creeds were suggested which did not use it, the statements they contained were found to be ambiguous, allowing both Arians and non-Arians alike to read their position in what was writing. Once its use was accepted, it took time for Christians to understand the full implications of its use (as well as to ensure that the misapplications of its use, some of which already existed before Nicaea, were discarded). Ultimately, the scriptures would influence how Christians interpreted the word homoousios even as the word would influence how Christians read the scriptures. More than any other book, John’s Gospel has empowered Christians to do just that. For it was John who provided the best texts to show the underlying divinity of Jesus, the truth that the inclusion of the word homoousios in the Nicene Creed was meant to strengthen. Thus, when Jesus spoke of the unity and glory that he shared with the Father, a glory that he had “before” the incarnation, and that he was to receive again, the homoousios may have been used as a means of understanding how Jesus could share in the glory of the Father

I have glorified you on earth, having accomplished the work which you gave me to do; and now, Father, glorify me with you with the glory that I had with you before the world was created. I manifested your name to the men you gave me of the world; they were yours, and you gave them to me, and they have kept your word. Now they know that everything you gave me comes from you; for I have given them the words which you have given me, and they have received them and know in truth that I come from you; and they thought you sent me. I pray for them; I don’t pray for the world but for those you gave me, because they are yours; all mine are yours, and yours are mine, and I am glorified in them (John 17:4-10 RSV).

Because Jesus is said to be the “Son of God”, it is as Son, eternally begotten of the Father, that he has all the things given to him by the Father. All that the Father possesses, including divinity, including divine glory, is given to the Son by being begotten of the Father. The “nature” of the Father is given to the Son, which makes them homoousios. This is why, “before” the incarnation, the Son shared and had the glory of the Father, the glory of the divine nature. In his kenosis he has emptied himself, so that in and through his assumption of a human nature he possesses a nature which does not possess in itself the fullness of this glory. Nevertheless, as Jesus asks that this glory be shown to the world, this glory is presented to us in the economy of the incarnation. This is especially true with regard to the resurrection of Jesus, for in it and through it the Father glorifies the Son, affirming to us the glory which the Son had before the incarnation, showing the world that indeed all that the Father has, the Son has in eternity. Again, the word homoousios is able to provide us with the means to understand this by showing that all that the Father has is the divine nature which therefore also has the Son. Thus, the relationship of the Father and the Son manifests itself in the economy of the incarnation; we should not confuse the human nature of the Son with all that the Son is, for then we would end up like the Arians, thinking that the Son is a mere creature. We should rather understand that this Son, the eternal Logos, came down and revealed to us the truth of his relationship with the Father in a conventional form (his human nature), not confusing the conventional representation of truth with absolute truth, but rather to understand how he indicates and manifests the absolute truth, God, to the world.

Arius, therefore, confused the kenotic form of the Logos which was revealed to us in the incarnation, that is, the created nature which the Logos assumed, as all that the Logos was. His misunderstanding of faith has led many astray. The faithful needed the shepherds of the church to provide an appropriate response to Arius’ claims and the faulty hermeneutics he used to interpret scripture. That’s what they did at Nicaea, especially with the way they introduced the term homoousios as a means of engaging the relationship between the people of the Trinity. They knew their best way to respond to Arius was to edify the faithful, to help them with the tools they needed to overcome Arius’ misinterpretation of the faith. This is what bishops should always do: edify the church, help the faithful when they are confused. They must understand that the role entrusted to them is that of a servant; they should not see that the power given to them is for their own benefit, but rather for the good of the church. So if and when they need to speak, they should do so with love and compassion, not as a triumphant display of authority, or worse, as a way to generate wealth and donations. If they do this, they question their exercise of power, because it seems, more than anything, that they are doing a stunt to draw attention to themselves. To act in this way shows that they are not acting in good faith; they don’t hire people out of compassion, and that’s exactly what bishops should be doing, working out of compassion, because that’s exactly what Paul said should guide the actions of church authorities. What bishops should be doing, then, is working for the good of the people, not for their own ambitions, or worse, their own political ideologies. The power they have should not be abused, and if they use it to threaten or unfairly weaken others, they risk bringing upon themselves the judgment they want to pass on others.

Staying in touch! Like a bit of nothing on Facebook.
If you liked what you read, consider sharing it with your friends and family!