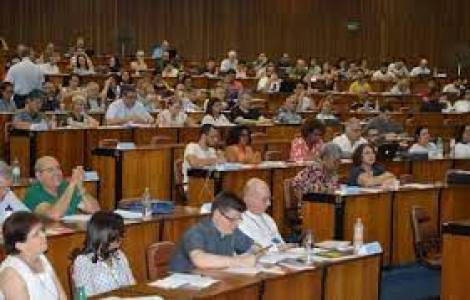 
Brasilia (Agenzia Fides) – From October 14 to 16, the X Assembly of “Organisms of the People of God” (ANOPD – “Assembleia dos Organismos do Povo de Deus”) will be held in Brasilia, which will bring together about 200 delegates from the different components of the Brazilian Church: National Council of Laity (CNLB), Conference of Religious (CRB), Conference of Bishops (CNBB), National Commission of Priests-CNP, National Conference of Secular Institutes (CNIS) and National Commission of Deacons (CND).
According to the note sent to Agenzia Fides, the delegates will participate in an online training meeting on October 7, led by Professor Laudelino Azevedo, consultant for the Commission for the Laity of the Episcopal Conference. Marcio José de Oliveira, secretary general of the CNLB, explained that the training aims to help participants situate themselves in the historical process of the Assemblies, which are now in their tenth edition: “The objective is to know from where it comes from, how it was born, what does this meeting space mean and the opportunity it offers to all organizations, especially as an expression of all the organizations present in Brazil”. The other objective, according to Marcio , is to include the X Assembly in the project of the Pontificate of Pope Francis: “It is part of the process of the first Ecclesial Assembly in Latin America and the Caribbean and also in the synodal movement on synodality. “.
“We want the X Assembly to be recognized by this process – says Marcio José de Oliveira -, because it is, without a doubt, the greatest synodal expression of the Church in Brazil, since it brings together the ecclesial subjects of the six organisms of communion. Therefore, it has a synodal character and, in the process of synodality, it imposes itself as a space of communion and mission, to the point that the motto of the Assembly is closely linked to the Synod”. of the Assembly is indeed “Communion and Mission: a journey for the Church in Brazil” with the biblical motto: “Keep the unity of the Spirit in the bond of peace” (cf. Eph 4,3) .
In their letter of invitation, the Presidents of the organizations express their wish that “this 10th National Assembly becomes a rich testimony of synodality between the different ecclesial entities and constitutes a privileged space for the exchange of experiences, thus expressing unity and communion of the Church in Brazil”.
The President of the National Council of the Laity of Brazil (CNLB), Sonia Oliveira, believes that “this will strengthen the witness of maintaining and preserving the unity that the Holy Spirit inspires in us as Church and will further strengthen this process of journey together, as Pope Francis asked us all for the Church of the third millennium”. (SL) (Agenzia Fides, 5/10/2022)