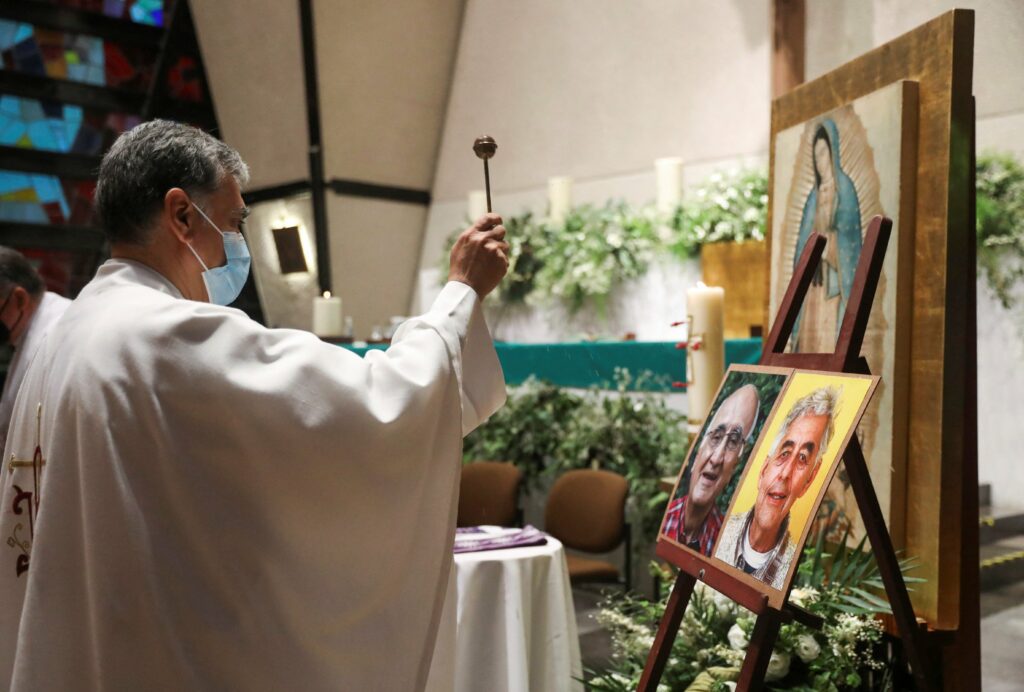 A priest blesses the pictures of Mexican Jesuit fathers Javier Campos Morales and Joaquín César Mora Salazar at St. Ignatius of Loyola Church in Mexico City on June 21, 2022. The two priests were murdered in their rural parish on June 20, while They sheltered an individual fleeing a shooter. (CNS photo by Edgard Garrido, Reuters)

MEXICO CITY — The Mexican bishops’ conference has called on the country’s president to review his security strategy as violence continues to rock Mexico and claim innocent lives, including clergy.

The bishops’ statement follows the murder of two Jesuits and a person they protected in their parish – a crime attributed to a local crime boss in a part of the country dominated by drug cartels, plagued by poverty and long neglected by the state.

“Crime has spread everywhere, disrupting the daily life of our entire society, affecting productive activities in town and country, exerting extortionate pressure on those who work honestly in markets, schools and small businesses, as well as medium and large enterprises. (The criminals) have taken over streets, neighborhoods and entire cities, as well as roads and highways,” the Bishops said in their June 23 statement.

“More seriously, (the criminal groups) have spoken through inhuman levels of cruelty in the executions and massacres that have made our country one of the most dangerous and violent places in the world.”

Priests had opened the parish to a person fleeing a kidnapping on June 20, according to Chihuahua investigators, but an armed individual burst inside and killed the person – identified as Pedro Palma, a tour guide.

Jesuit Father Javier Ávila, a prominent human rights defender in the state of Chihuahua, later told several Mexican media outlets that one of the priests immediately rushed to provide “spiritual assistance” to the victim and had been killed. A second priest approached the shooter saying “calm down” and was also killed. A third priest intervened, but was not attacked, according to Father Ávila’s version of events given to the newspaper Reforma. The assailant then took away the three bodies from the parish.

Chihuahua state officials said they found three bodies on June 22. The Jesuits confirmed on June 23 that two of the bodies were those of Fathers Campos and Mora.

Mexican authorities named a local crime boss, José Noriel Portillo Gil, as a suspect in the murders and offered a reward of 5 million pesos (US$250,000).

Palma, the tour guide, was kidnapped and apparently escaped Portillo’s custody and ran into the church. Two other people were also abducted by Portillo after an altercation with him earlier in the day, according to the prosecutor.

The killings have sparked outrage among Jesuits and wider Mexican society as yet another atrocity in the country’s ongoing violence.

“Acts like these are not isolated,” the Jesuit Province of Mexico said in a June 21 statement. “Sierra Tarahumara, like many other parts of the country, faces conditions of violence and neglect that have not been reversed. Every day, men and women are arbitrarily deprived of life, like our brothers (who) were murdered.

“The Jesuits of Mexico will not remain silent in the face of the reality that is tearing all society apart,” the Jesuits said. “We will continue to be present and to work for the mission of justice, reconciliation and peace, through our pastoral, educational and social projects.

Father Arturo Sosa, Superior General of the Jesuits, said via Twitter: “I am shocked and saddened by this news. My thoughts and prayers are with the #Jesuits in #Mexico and the families of the men. We must stop the violence in our world and so much unnecessary suffering.

At least seven Mexican priests have been killed since December 2018, when President Andrés Manuel López Obrador took office, according to the Catholic Multimedia Center in Mexico City.

López Obrador has promoted a misunderstood “hugs, no bullets” security policy, though violence continues to tear through many parts of Mexico. He also blamed the policies of his predecessors for provoking the violence.

The bishops of Mexico have called for a different approach.

“It’s time to revisit failing security strategies. It is time to listen to the citizens, the voices of the thousands of loved ones of victims and murdered and missing persons (and) police officers killed by criminals,” the Bishops said.

“We believe there is no point in denying reality and blaming the past for what we need to resolve now. Listening to yourself does not make anyone weak; on the contrary, it strengthens us as a nation.

López Obrador insisted he would stay the course on security, saying at his June 23 press conference: “When they say ‘change security strategy’, no!” he said, adding, “You cannot meet violence with violence.”

Jesuits have a long history of working in the Diocese of Tarahumara, which covers Copper Canyon. The region is home to the indigenous Rarámuri people, also known as the Tarahumara.

Father Campos, nicknamed “El Gallo”, was born in Mexico City and joined the Jesuits at the age of 16. He had worked with the Jesuit mission in the Sierra Tarahumara for 34 years, serving as vicar for indigenous diocesan ministry and as regional councilor for base church communities.

Father Mora, nicknamed “El Morita”, was born in Monterrey and also joined the Jesuits at the age of 16. He served in the Sierra Tarahumara for 23 years and worked for a time with the Jesuit mission in the southern state of Chiapas.

The man accused of killing the priests allegedly terrorized the area, controlling drug trafficking, illegal logging and alcohol sales, according to statements by priests and news reports.

Father Ávila and other Catholics in the area told the media that they remained silent after the killings for security reasons. Father Ávila had to receive state protection after denouncing the continuing impunity of a 2008 massacre that left 13 dead at a party in the municipality of Creel, a departure point for tourists visiting the Copper Canyon.

U.S. Bishops Respond to Roe v. Wade: “The work has only just begun”