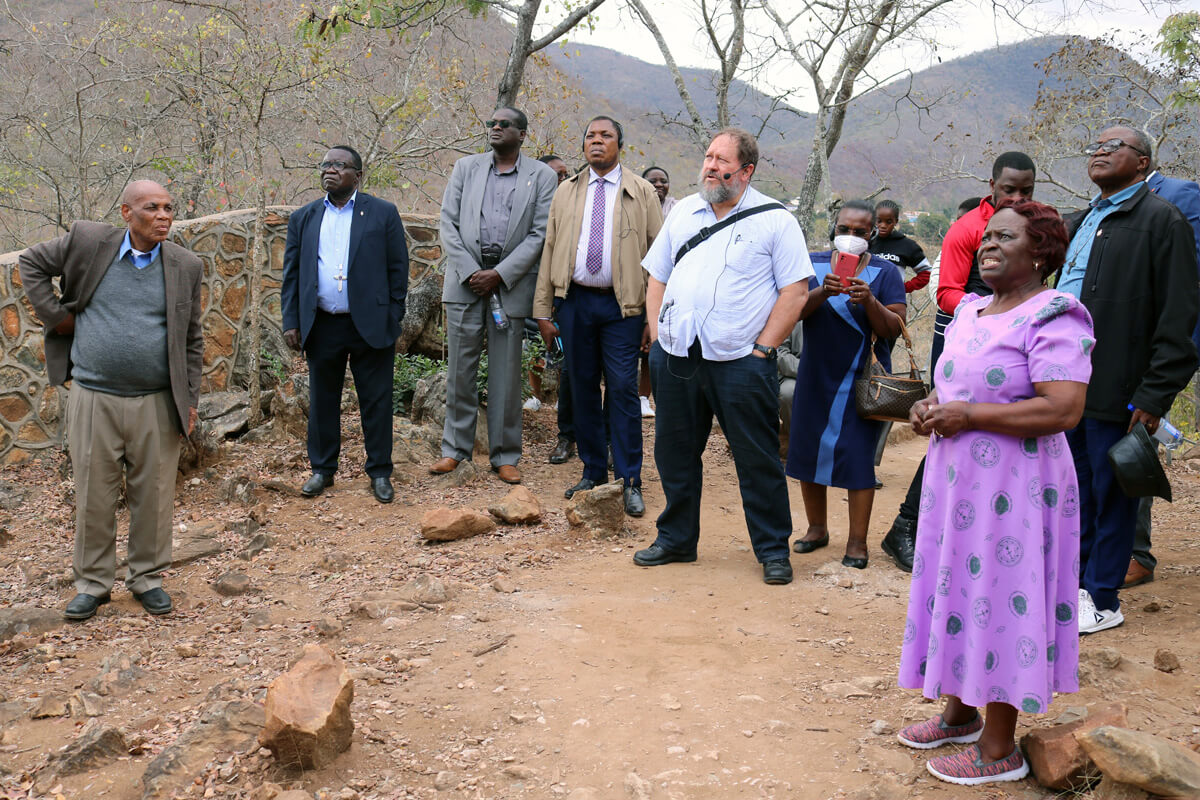 African bishops have called for unity in The United Methodist Church while condemning traditionalist advocacy groups seeking to break up the denomination.

The bishops issued a statement on September 8 denouncing the Africa Initiative and the Wesleyan Covenant Association, which they claim are “wrongly influencing the people of God in our regions”.

The statement was released at the closing of the Episcopal Colleges of Africa retreat, held September 5-8 at Africa University. The bishops of the denomination are organized by quorums, or groups, according to their regions; Africa has three such colleges.

Retired Bishop Ntambo Nkulu Ntanda (right), who led the North Katanga Episcopal Area, contributes during a presentation on worship as Bishop Daniel Wandabula of the South Africa Episcopal Area looks on East during the Africa College of Bishops retreat held September 5-8 at Africa University in Mutare, Zimbabwe. The bishops released a statement saying they “will not tolerate anyone giving false information about The United Methodist Church.” Photo by Eveline Chikwanah, UM News.

The Bishops’ statement says the Africa Initiative is working with the Wesleyan Covenant Association to destroy the church in Africa through its support of the World Methodist Church, a denomination not yet recognized by the General Conference.

The bishops also addressed the misinformation that is spreading in the church.

“We will not tolerate anyone giving false information about The United Methodist Church,” the statement said.

All active Bishops on the continent, except the Regional Bishop of Nigeria, John Wesley Yohanna, have signed the declaration.

Yohann emailed a brief statement to UM News, saying that while he respects the views of his fellow African Bishops, he continues to support the Africa Initiative and the WCA.

“The Africa Initiative and Wesleyan Covenant (Association) push for obedience to the Bible and the Book of Discipline. Why shouldn’t we associate with them? said Yohann, who did not attend the meeting. Yohann is a member of the United Methodist Commission on Communication, which oversees UM News.

WCA President Jay Therrell said the advocacy group and sister organizations have a long history of working with African leaders as equal partners, and the WCA World Council includes leaders from across the African continent.

“We are deeply disappointed, but not surprised, by the statement supposedly coming from all African bishops,” he said. “We have been told that the statement is not supported by all bishops in Africa and we regret that it insinuates that is the case.”

He added that the WCA believes that “the heavy-handed control tactics of some African bishops undermine the Christian freedom of their members to speak about the current and future direction of The United Methodist Church and their role in it. We remain committed to working with Conservative Methodists across the African continent to strengthen their testimony of faith and their right to make informed decisions about their future in the church.”

UM News also contacted leaders of the Africa Initiative and did not immediately get a response.

Bishop Eben K. Nhiwatiwa, president of the Colleges of Bishops in Africa, said the church is thriving on the continent and there is no need to break with the denomination.

“Unity is our constant point of reference. Bishops say there is no need to break from The United Methodist Church and join another denomination,” said Nhiwatiwa, who leads the Zimbabwe Episcopal Area.

He said the World Methodist Church had nothing new to offer Africans.

“We don’t see anything new as we are traditionalists from start to finish here in Africa. If you want to see conservative people, come to Africa.

“If something happens that makes us uncomfortable in the future, we will sit down and see how we channel our efforts in the church.”

After decades of escalating disagreements over the status of LGBTQ people in the church, General Conference was due to vote on a denominational separation plan in May 2020.

But after a third postponement by the denomination’s highest legislature, organizers at the Methodist World Church decided to launch on May Day. the new denomination. The Africa Initiative is an unofficial traditionalist advocacy group representing laity and clergy in Africa.

The statement appears to be a game changer for some bishops who have a history with the Africa Initiative. Bishops Kasap, Quire and Yohanna attended the Africa Initiative meeting in May in Nairobi, Kenya, as the group reflected on the future of Methodism in Africa. The Bishops indicated at the time that their attendance at the gathering was not sanctioned by the African Bishops as a group, but were attending the understanding that they would inform their colleagues.

The Bishops’ Retreat, themed “Learning and Worship,” included presentations on Principles of Effective Leadership by Pamela Machakanja, Acting Deputy Vice-Chancellor of Africa University, and Effective Christian Worship of the Reverend Beauty R. Maenzanise of the United Methodist Board of Higher Education and Ministry.

The gathering ended with a visit to the Chin’ando Prayer Mountain in Old Mutare, which was developed by United Methodist women in the Episcopal area of ​​Zimbabwe.

During the meeting, the Bishops shared their joys and hopes for the future and also noted some of the challenges facing the Church in Africa.

“Sometimes we don’t have enough resources. It is a common problem in Africa, but our people are working very hard to build churches, schools, shelters for expectant mothers, even during COVID-19 closures,” Nhiwatiwa said.

He urged church leaders to be bold and courageous in their leadership.

“We try to give direction; That’s what it’s about. You can’t be a leader if you just want to be in a comfort zone.

These thoughts were echoed at the end of the Bishops’ statement.

“We will continue to shepherd all of God’s people across our beloved continent.”

Chikwanah is a broadcaster from the Zimbabwe East Conference.