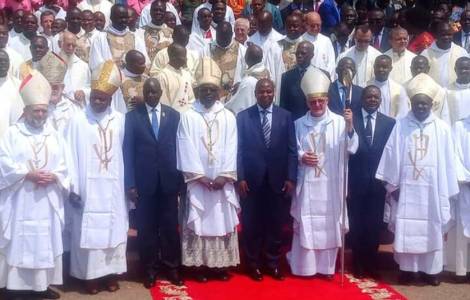 Bangui (Agenzia Fides) – The food crisis threatens the Central African Republic, says the local Episcopal Conference in the message published at the end of the Plenary Assembly.
“In some towns, a food crisis is feared due to the destruction of fields and the theft of oxen”, say the Bishops in the document sent to Agenzia Fides. The situation is further aggravated by “the shortage of fuel which the country is already experiencing very difficultly, and is causing an increase in the prices of foodstuffs and basic necessities whose stocks are decreasing”.
“Social life today runs at the pace of supply capacities with long lines of vehicles sometimes accompanied by deplorable scenes of violence. In our hospitals, an increase in deaths and a lack of first aid and assistance to the sick are to be feared”, the Bishops complain.
Central Africa is at the center of a complex plot due to the presence of various guerrilla groups and foreign (Rwandan) soldiers and Russian mercenaries.
“The conflict between Russia and Ukraine and the presence of Russian forces working alongside the Rwandans and the Central African Armed Forces (FACA) for the reconquest of all the extension of the national territory and for the pacification of the Central African Republic, today place our country in a rather delicate position”, underline the Central African bishops, recalling that “war means human and material destruction, abuse, rape and violation of human rights, destruction of property, places of worship and exploitation of religious beliefs”. “After having lived it, one cannot wish this horror on any people”.
By collecting the indications that emerged during the Synod held in Bangui from October 24 to 31, 2021, the Bishops call “the Central African Church to rediscover the authentic meaning of mission: “By following the mission of Christ, the Church does not can be assimilated to a Non-Governmental Humanitarian Organization (NGO). We invite the Basic Ecclesial Communities (CEB), the Movements and the Fraternities, the different diocesan structures to rethink their way of being and functioning. In this way, they will become more real places of communion and compassion, of love and listening to the poor, of accompanying people who live in situations of suffering and of reintegrating the marginalized”.
“We invite each baptized person to be a true artisan of the Synod and to spread its fruits in his living environment. To walk together, in fact, is to promote a culture and a civilization of peace and love that triumph over hatred, jealousy and fear of the other”, concludes the message. (LM) (Agenzia Fides 06/30/2022)