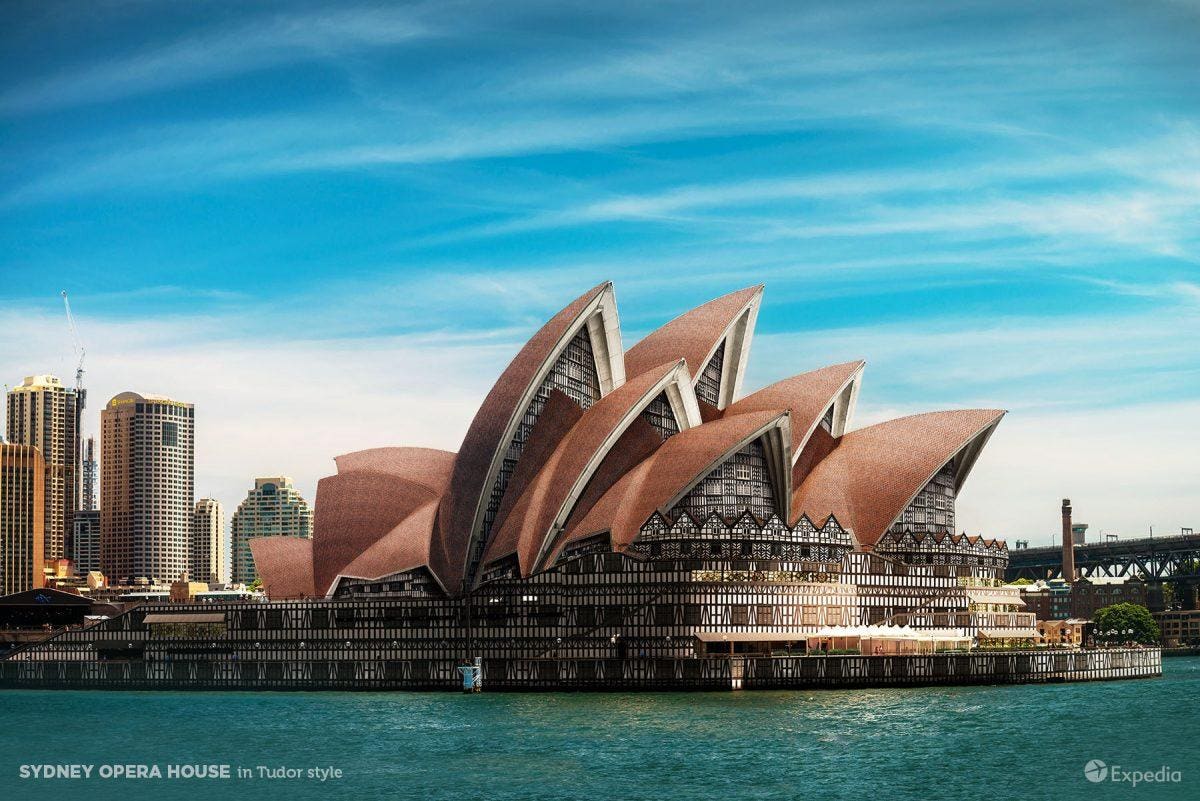 Great architecture is the window to the aesthetic heart of every cityscape. Think of any world city and almost immediately an image of its most iconic building will probably pop into your head. Cairo and its pyramids. Washington DC and its White House. Barcelona and its Sagrada Familia.

Indeed, for many travelers and tourists, the buildings themselves are as important as the city or country in which they are located. I mean, nobody goes to Sydney but doesn’t bother to visit the Opera House.

But what if these much-loved and much-visited buildings had been designed by someone else, built in a different time and in a different style?. How would that affect the landscape, the vibe of the town, and would they really look as weird as you might imagine? Well, for no other reason than to find out, Expedia That’s exactly what he did: reinvent seven iconic buildings from around the world in completely different architectural styles. Weird and wonderful indeed.

Oh, and if the images seem too small, enlarge them or open them in a new tab. They are in high resolution, so you should be able to see all the architectural details.

The Tudor style of the Sydney Opera House

Danish architect Jørn Utzon’s 1973 masterpiece is one of the most famous and photographed buildings of the 20th century. It attracts over eight million visitors a year to try and make sense of its curved orange segment shapes and marvel at its awe-inspiring setting overlooking the mouth of Sydney Harbour. But what if this modern expressionist building had been designed and built in the 16th century? Well, something like that maybe – all the intricate work of exposed beams, steep gabled roofs, masonry chimneys and close clustered windows. I’m not sure Utzon would approve.

Frank Lloyd Wright’s stately and rural Fallingwater House, set deep in the Pennsylvania forests, is rightly recognized as one of the most beautiful buildings in the world. Time even included it in its “life list of 28 places to visit before you die”. Built with extraordinary empathy for its surroundings, cantilevered to reach (as if to touch) the nearby waterfall, it strongly reflects Wright’s love of Japanese architecture. But what if Wright were a man of classical tastes as espoused by the architects of ancient Greece? We would then probably find ourselves in front of a much more grandiose building carved in stone and marble, completed of course by a brace of symmetrical columns. Sure, it lacks Wright’s finesse, but at least it’ll still be standing in a few millennia.

Oh, Paris. Undoubtedly one of the most beautiful cities in the world whose wealth of ancient architectural gems could easily overshadow the more modern additions to the cityscape. Yet the Louvre has managed to hold its own as the most visited art museum in the world, thanks in large part to a certain portrait of Leonardo da Vinci hanging on its walls. Originally built as a medieval fortress, it served a variety of functions, including being the residence of the French royal family from the 14th century until its reinvention as a public museum in 1793. Its iconic glass and steel pyramids have were added later, completed in 1989 from designs by American-Chinese architect IM Pei, and sits like a perfect modernist mirror to its intricate Renaissance-style surroundings. Here, though the designer has gone to town with the concrete, creating a towering but oddly intricate monolith, even Erno Goldfinger would have been proud.

The Queen’s City Pavement has been the backdrop for paintings, photos, pomp and ceremony since 1837, when it became the official British royal residence. Originally a private townhouse which was built and developed into the vast palace it is today (775 rooms and counting!), its main facade was built by Edward Blore in 1850 before being remodeled in the early 20th century by the venerable Sir Aston Webb. But given the British aristocracy’s close ties to Germany, it seems logical that the next remodeling would be in the Bauhaus style (literal translation “building house”) from the 1920s. Famous mix of form and function for unique results, this reimagining is all about minimalism, geometric shapes, fuss-free facades and vast swaths of windows giving it a 1960s embassy feel. We’re not having fun.

Toronto’s Giant Javelin, planted on the shores of Lake Ontario, was, at 1,815 feet or 553 meters tall, the world’s tallest freestanding building from its construction in 1975 until the Burj Khalifa opened in Dubai in 2007. Canadian National (hence the CN Tower) attracts two million visitors a year, but was originally built as a television and radio communications platform to show the world the strength and breadth of Canadian industry . The Egyptians were equally adept at erecting giant buildings ahead of their time – architects who also loved tall, pointed obelisks that soared skyward to honor an event or a god – and so this architectural redesign seems fitting if not exactly subtle.

Kuala Lumpur’s twin skyscraper towers were Malaysia’s declaration to the world in the 21st century that it is a modern, forward-thinking and powerful nation. The 560-foot-tall Skybridge connects them and provides an excellent vantage point of the tallest buildings in the world from 1998 to 2004. Argentinian architect César Pelli used a distinctive postmodern architectural style for his towers and incorporated the latest tricks and technology to ensure they could withstand the tall windows and massive loads they were subjected to every day. Monumental and strong, this gothic reimagining brings the Middle Ages to Malaysia with its pointed arches, stained glass windows and, if you look closely, even a gargoyle or two.

The most modern building on our list is also getting the most modern makeover. Oscar Niemeyer’s Museum of Contemporary Art near Rio de Janeiro is a late 20th century masterpiece – a modernist saucer of slopes, angles, open spaces and serene pools wedged between a cliff and a beach. Niemeyer himself compared it to a UFO landing there and hinted that it was his inspiration. Its alien shape lends itself well to this long-lasting makeover, all natural curves and glass shapes that let in light and make it energy efficient and eco-friendly. Maybe all buildings will look like this in the future, which might not be a bad thing.

Visualizations and designs by This is rendering

East Nashville Church building is wanted for a hotel | Development