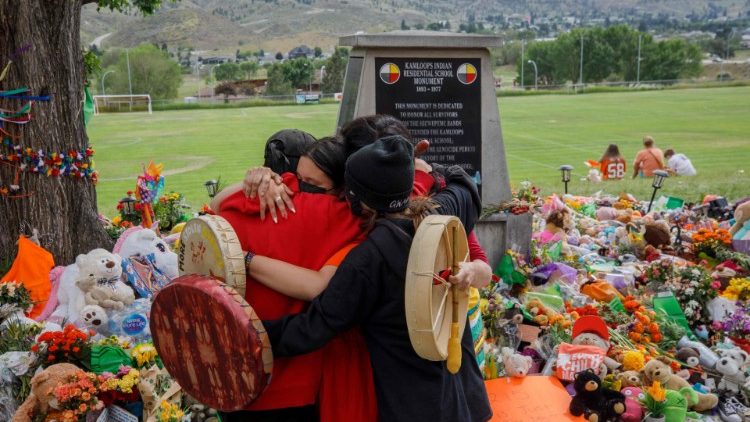 The Bishops of Canada confirm that several indigenous delegations will meet with Pope Francis in the coming days and express their hope that the meetings will help to address the trauma and suffering caused by residential schools.

By Francesca Merlo
A statement issued by the Canadian Conference of Catholic Bishops (CCCB) Press Office confirmed an announcement made Wednesday by the Holy See Press Office.

“This weekend, a delegation of 32 Indigenous Elders, Knowledge Keepers, Residential School Survivors and youth will travel together from across the country to meet with Pope Francis.

Delegates from across Canada
The Bishops of Canada say “the delegates, who were selected in collaboration with the Assembly of First Nations (AFN), the Métis National Council (MNC) and the Inuit Tapiriit Kanatami (ITK), bring a deep lived experience and insight into the legacy of residential schools and the impacts of colonialism, and many are directly engaged in the ongoing journey of healing and reconciliation. »

Their names were published by the AFN and the MNC respectively, although some preferred to remain anonymous. The representatives will take part in a press conference on March 28.

“As Canadian bishops, we are grateful to these delegates for accompanying us on this journey and to Pope Francis for his attention to their suffering and his deep commitment to social justice,” said CCCB President Msgr. Raymond Fish.

“We hope that these private meetings will allow the Holy Father to meaningfully address both the ongoing trauma and legacy of suffering suffered by Indigenous peoples to this day, as well as the role of the Catholic Church in the residential school system, which contributed to the suppression of Indigenous languages, culture and spirituality.

Postponed due to Covid
The meeting with Pope Francis was originally announced by the CCCB in November 2021, shortly after the Catholic Bishops of Canada issued a formal apology to Indigenous peoples for the Church’s role in staffing residential schools.

The bishops of Canada had unanimously approved a statement acknowledging that “serious abuses” had been committed by some members of the Catholic community, and had expressed their “deep remorse” and offered their “unequivocal” apologies.

In the statement released on Friday, they said abuse had taken place “physical, psychological, emotional, spiritual, cultural and sexual”.

At the time of the initial announcement last November, CCCB President, Bishop Raymond Poisson, said, “The road to healing and reconciliation is long, but we believe this will be an important step in the commitment of the Catholic Church to renew, strengthen and reconcile relations. with Indigenous peoples across the country.—Vatican News