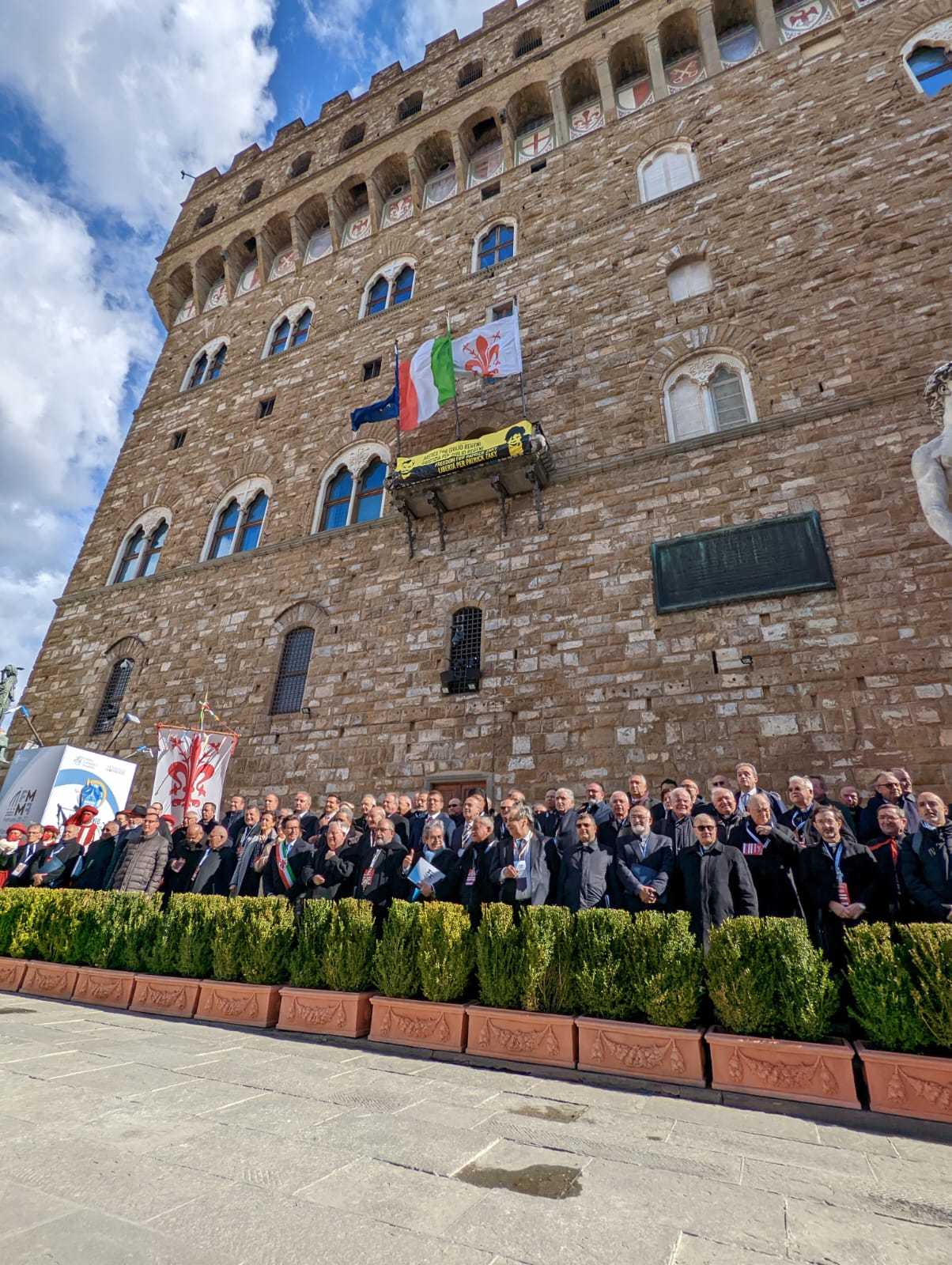 FLORENCE, Italy — Bishops and mayors across the Mediterranean region on Saturday called for an immediate end to violence in Ukraine, calling for negotiations to find a peaceful resolution to the conflict.

“A sense of pain has taken hold of the bishops and mayors, who together hope that the violence and the use of arms could stop, that great suffering to the Ukrainian people could be avoided and that negotiations to rebuild peace could begin immediately,” the charter reads.

The declaration is contained in a document called the “Charter of Florence”, signed by bishops and mayors from around 60 cities and 20 countries in the Mediterranean, participating in a previously scheduled summit organized by the Italian bishops’ conference to discuss the peace in the region.

Participants acknowledged that the meeting, intended to focus on one part of the world, was inevitably impacted by another, referring to the “war [that] takes place against Ukraine.

Several Middle Eastern bishops have pointed to their own experience of the war as a model for reading events in Ukraine, where Russian forces on Sunday morning appeared to be stepping up their assault on the capital Kiev.

“We have the experience of the war in Iraq”, “Even today, peace is not stable in Iraq”, which is why preaching and praying for peace becomes all the more urgent. But “we must not only pray for peace”, he said, “we must also intervene and act to build this peace”.

Surprisingly, none of the Middle Eastern bishops present expressed sympathy for Russia or President Vladimir Putin, who has sometimes been seen by Christian leaders in the region as a protector against Islamic radicalism.

“War always causes damage,” Saleen said. “We hope this war will end soon. We pray, yes, but we have to do something for this war to end. In Europe, but also around the world, where there are many ongoing conflicts.

This point was echoed by the Chaldean Patriarch of Baghdad, Cardinal Louis Raphael Sako.

“In Iraq we had bad experiences with wars, now the same is happening in Ukraine,” he said. “Political and religious leaders must not remain indifferent.

Argentine Cardinal Leonardo Sandri, the Vatican’s top official for the Eastern Catholic Churches which are particularly present in the Middle East and Eastern Europe, acknowledged that in light of the drama in Ukraine, he at one point believed that the weekend summit would be cancelled.

However, he said it was necessary to move forward to highlight “the irrationality of war, and the fact that no problem can be solved by arms”.

“We are shocked,” he said. “On the other side of Europe, people are being murdered in a shameful, terrible way that leaves us speechless.”

The gathering in Florence was held at the city’s Palazzo Veccio, with majestic frescoes adorning every corner of the room where the event was taking place. Although it serves as the town hall, it is known worldwide as the home of a copy of Michelangelo’s David.

On other topics, the bishops and mayors noted the benefits that flow from intensifying collaboration in their cities to preserve justice, strengthen brotherhood and respect for all citizens and cultural and religious communities who are present there, also through the promotion of sister cities and dioceses.

Their three-page charter recognizes the commonalities between the nations of the region, both historically and currently, including the challenges of climate change and migration. It also calls on city and state governments, as well as religious leaders, to work together for the Mediterranean region, made up of 21 countries, including France, Spain, Italy, Turkey, Lebanon and Libya. Many mayors who signed the charter are Muslims, which was underlined by both the president of the Italian episcopal conference and the mayor of Florence.

Jamal Itani, the mayor of Beirut, said the dialogue in Florence “lays the foundations for good cooperation between the cities of the Mediterranean, to try to solve problems common to many places, and at the same time unique to d ‘others “.

Since the start of the war in Syria nearly a decade ago, Lebanon has hosted 1.5 million refugees, who represent a third of the population of 4.5 million people. No country in the world has ever had such a proportion of citizens and refugees.

“It had a major impact on our infrastructure and the lives of the Lebanese,” he said. “A meeting like this lays the groundwork for better cooperation between cities that may not be able to accommodate refugees, but can help us improve our infrastructure to provide a dignified human life to those who flee. war and persecution, while maintaining that of our citizens.

Node asked Itani about a possible papal visit, since Pope Francis has long expressed his desire to go. “We have high hopes that he will come soon: he has promised to visit us, and it could happen this year.”

Itani said Beirut was already engaged in preparations for a possible visit.

Sandri, the Vatican official, described the meeting as “very concrete and useful”.

Mayors, he said, follow the day-to-day realities and concerns of citizens, far more than national governments, while bishops follow the life of the people’s minds. As such, they are “a fundamental complement to create the foundations of a new civilization in which dialogue can have concrete growth”.

When it comes to helping migrants and refugees, as well as those in need, he said Nodethere is no “politics”, nor ideologies.

“The policy is to help those in need, so that everyone has access to education and health, to freedom, including religious freedom; and to pursue justice and solidarity, especially in this Mediterranean situation,” he said. In this region, he pointed out, due to the constant migratory flow, several mayors are themselves migrants.

Totò Martello, mayor of the Italian island of Lampedusa, visited in 2013 by Pope Francis as a sign of support for this city which has become the gateway for thousands of people crossing the Mediterranean Sea in search of peace, said Node that “not having a dialogue means giving room to arms, giving room to those who have an interest in dominating and controlling the world without democratic debate”.

“Talking involves creating antibodies in people to make them realize that nothing can be solved with weapons,” Martello said. “We arrived here with the awareness that it is important to seek collective presences to talk about such delicate issues as migration and peace.”

Dialogue, he said, is important because “it’s harder to calm things down when the fire has already started.”

In this regard, Florence has been a school of dialogue for religious and civil representatives of different ideas and sensitivities, Sako said.

“In this meeting, and in the Charter, we have reaffirmed that we are one humanity, one human family, with the same dignity, the same freedom and the same rights,” he said. “The same freedom sought by those fleeing wars, instability and poverty.”

The event in Florence included the participation of personalities who raised their eyebrows, such as six mayors from Libya (invited and announced as participants, but who ultimately did not show up), and former Italian minister Marco Minniti, president of Med – Gold Leonardo, one of the greatest arms manufacturers in the world.

(As a footnote, several sources stated Node that Minniti’s presence played a role in Pope Francis choosing not to make the trip to Florence and to listen to his doctor, who ordered him to rest due to severe knee pain.)

Polish bishops are concerned about the evolution of the synodal path