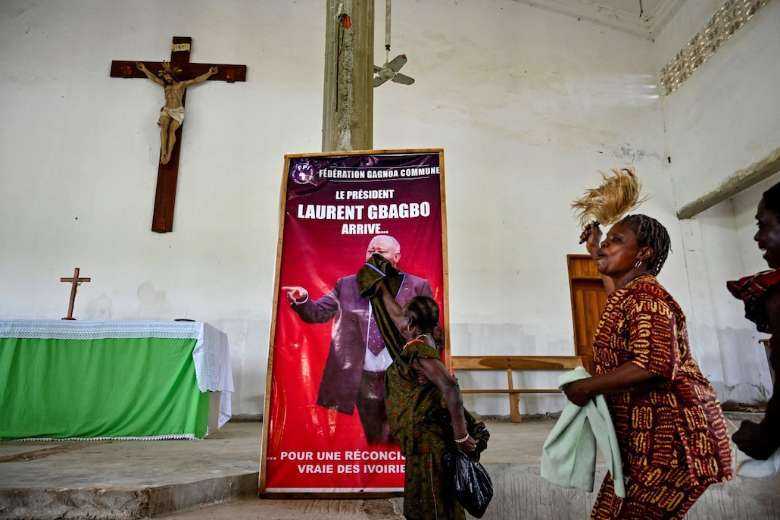 As Politicians Fail on the Continent, the Masses Turn to the Church to Share Jesus’ Message of Hope with a Traumatized Society

A woman cleans an Ivorian Popular Front poster before a mass at a Catholic church in Mama, near Gagnoa, Ivory Coast, on June 13, 2021. (Photo: AFP)

Depending on the outlook, Africa has been described in both glowing and horrifying terms. For example, in 2015, a certain Chris Meadows wrote that it “is the second largest continent, home to over a billion people, 56 recognized countries and one of the greatest geographical and cultural diversities in the world. world “.

With stoic optimism, he argued that “it is also possible to see intense faith, joy in the work and hope in the eyes of young people” across the continent.

However, he decried that “the people of Africa live in the most austere deserts, verdant forested jungles, rich grasslands and teeming cities such as Lagos, Cairo and Kinshasa” and lamented that “visiting Africa , is to see poverty, inequality and seemingly insurmountable political and social dilemmas.

The Church in Sub-Saharan Africa, like others around the world, began its synodal process in October 2021. It runs until April 2022 and leads to the Assembly of the Synod of Bishops in October 2023.

The theme, “For a Synodal Church: Communion, Participation and Mission”, is beautifully summarized in a 60-page document entitled “Official Manual for Listening and Discernment in the Local Churches of Dioceses and Episcopal Conferences”.

The desired communion that the Synod calls for is based on Jesus who reconciled us to the Father through the Holy Spirit. On this basis, we are rooted in the love and unity of the Trinity. Inspired by the Word of God and the living tradition of the Church, we are rooted in the sensus fidei (p.13).

“Similarly, it is unfortunate that in Africa ethnicity seems thicker than the waters of baptism”

Unfortunately, Africa is grappling with challenges such as illiteracy, poverty, disease, conflict and political unrest. These are the consequences of elite greed and the ruthless political class. Unfortunately, they are a huge discount to the expected fellowship that everyone should enjoy in terms of justice and equity – hallmarks of church fellowship.

Likewise, it is unfortunate that in Africa ethnicity seems thicker than the waters of baptism. How will the Synod address the gap between rich and poor, literate and illiterate, urban and rural, men and women, young and old, clergy and laity? Concretely, can the Synod draw lessons from Rwanda to stem the tide of ethnic divisions capable of curbing genocides across the continent?

The document argues that all of God’s people – lay, consecrated and ordained – should “engage in the exercise of deep and respectful listening to one another” creating “space for us to hear together the Holy Spirit” to guide “our aspirations for the Church of the third millennium” (p.13).

The Church invites us to make those on the margins of society feel at home by engaging them in meaningful dialogue, discernment, and counseling in relation to pastoral care. This means that the Church must relate to various social concerns.

In 2021, the United Nations Population Fund estimated that “about 50 million people over the age of 60 represented about 5% of the population of sub-Saharan Africa”, but lamented that “in the past, most of Many of them turned to their families for help, but this practice is becoming less common.

With the largest number of children (more than 19 million in 2017) among its migrant population, what is the place of children in this Synod? What would be the place of refugees who fled countries like Chad, Sudan, Yemen, Syria, Ethiopia, Sudan and the Central African Republic? What about ecumenism in Nigeria, Egypt, Ivory Coast and Kenya where there is often friction between Christians and Muslims?

The mission of the Church is to “witness to the love of God within the whole human family” across the social, economic, political, geographical and existential peripheries of the world in the fulfillment of the “Kingdom of God” ( p.13) . The synodal process at the local level involves discernment through listening, creating space for the guidance of the Holy Spirit, ensuring that everyone is treated equally and aggregating inputs in a well articulated (Cf.pgs.15-16).

Unfortunately, 28 of the world’s poorest countries are in Africa; half of Africa’s population lives in poverty (on US$1.90 or less per day) without access to basic human needs like nutrition and clean water. Some 15 of Africa’s 54 countries struggle with wars and violence by armed groups. According to reports, 27% of people on the mainland are directly affected by bloodshed, chaos and post-traumatic stress. In 2019, the Armed Conflict Location and Event Data Project revealed that there were 21,600 incidents of armed conflict in Africa. How will the Synod respond to these humanitarian needs which constitute existential threats?

Members of the hierarchy must avoid the temptation to want to lead instead of being led by the Holy Spirit. They should also look beyond the visible boundaries of the Church to “the worlds of economics and science, politics and culture, arts and sports, media and social endeavours” (p. .21) for new perspectives on contemporary challenges. Also, the synodal process should not be seen as a kind of secular parliament where only “those who are already involved in the activities of the Church” (p.22) are heard.

Does involving everyone mean that the Church should slow down the reception of Holy Communion by divorced and remarried couples? Well, the gracious words of Pope Saint John Paul II that we should embrace “love and responsibility” are key. Historian Jeffrey Mirus recommends that the Church “desperately needs the leadership of those who understand that good rules are as necessary as they are liberating, and who can teach ‘the rules’ so that we can grasp their foundations and deeper meaning.” .

In conclusion, the Synod should create more avenues of active listening and sincere consultation. After all, “the synodal process is not an end but a new beginning” (p.36).

Despite the apparent challenges facing the African continent, Pope Benedict XVI believes that he sees “reasons for hope in the rich intellectual, cultural and religious heritage of Africa” (African Munus#9).

Because politicians have failed on the continent, the masses are now turning to the Church to share Jesus’ message of hope with a traumatized society. The Church in Africa has the ability to rekindle hope that the world’s second largest continent can resist ideological colonialism in all its ramifications. Through wise investment in catholipreneurship (a self-sufficient church) and co-responsibility, the church in Africa can stay afloat in faith, morals and visionary leadership.

* Father Justine John Dyikuk is a lecturer in mass communication at the University of Jos in Nigeria, editor of a Caritas newspaper and organizer of the Media Team Network Initiative (MTNI) in Nigeria. E-mail: [email protected]The opinions expressed in this article are those of the author and do not necessarily reflect the official editorial position of UCA News.

Pope thanks Polish bishops for massive reception of Ukrainian refugees