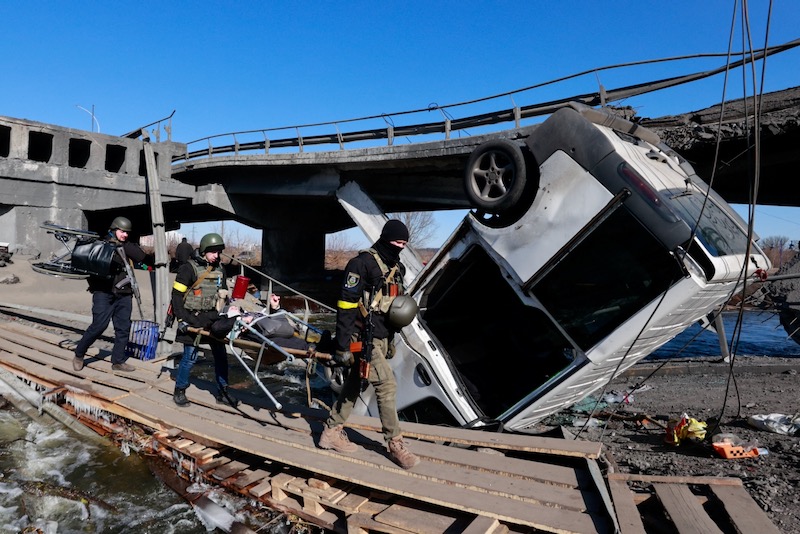 A person injured by shelling by Russian forces is carried in a stretcher on wooden planks crossing the Irpin River.

The German Bishops’ Conference has called on the Patriarch of Moscow to take a clear stand against Russian military aggression in Ukraine.

He very much hoped for a “clear statement against Russia’s military aggression in Ukraine,” said Bishop Gerhard Feige of Magdeburg, who heads the conference’s ecumenical commission, in Bonn.

Feige strongly condemned the violence and destruction that Russian armies were causing in Ukraine. He hoped the war would soon be over and the bloodshed would stop, he said. “The faithful of all faiths and religions in Ukraine are suffering in this war and it is the responsibility of the Moscow Patriarchate to act for them all.”

The German bishops also condemned any justification for Russia’s war of aggression. “There must be no overt or indirect support or legitimization of the Russian war from religious protagonists,” Feige said. Earlier this week, the Patriarch of Moscow Kyrill I called Russia’s opponents “forces of evil”.

The head of the Justice and Peace Commission in Germany, Bishop Peter Kohlgraf of Mainz, criticized the “close relations” between the Russian Orthodox Church and political powers in Russia. It was fundamentally problematic “to consolidate political power with theological motives”. War and violence against others can never be theologically justified, he stressed on March 4 on Deutschlandfunk.

“Behind the scenes, Germany must do everything in its power to de-escalate the conflict, but it must also make it clear that it stands with the Ukrainian people and that the government has now done so by sending arms,” German military bishop Franz-Josef Overbeck of Essen told the Bild Zeitung.

Meanwhile, many Catholic bishops in Africa remain silent on the Russian invasion of Ukraine.

The Tablet has reached the Catholic Church in Sudan, the Democratic Republic of Congo (DRC), the Central African Republic (CAR) and Kenya. Sudan said it preferred not to comment. On February 23, Sudan’s top general Mohamed Hamdan Dagalo flew to Russia to meet with the foreign minister and defense officials.

Kenyan officials said there would be no comments or statements from the Bishops, without giving reasons. Similarly, the Association of Member Episcopal Conferences of Eastern Africa (AMECEA) said it would not comment on the matter.

So far, the church in the DRC and CAR has not responded to our request for comment. Russia has a known presence in the CAR, while some reports indicate that it has attempted to enter the DRC.

Prof. Russell Pollitt, director of the Jesuit Institute in South Africa, said Russia’s “aggressive and immoral” attack on Ukraine must be condemned in the strongest possible terms.

“It is an outright affront to human dignity and immorally reprehensible,” Pollitt said. “The peace of all of Europe is threatened and the whole world will be poorer and affected by the imperialist invasion.”

The official said the institute wanted the government to tell the Russian president to stop the attacks and immediately seek a solution through dialogue.

Anglican Archbishop Thabo Makgoba of Cape Town said the flagrant violation of the UN Charter by the Russian Federation’s invasion of the sovereign nation of Ukraine should not be overlooked.

“…I urge the government to unequivocally condemn the Russian invasion. After all the support the United Nations has given us in the fight against apartheid, it is unthinkable that we would condone such a flagrant violation of a central principle of the United Nations Charter,” Makgoba said.

US bishops cheered by migration ruling, dismayed by another