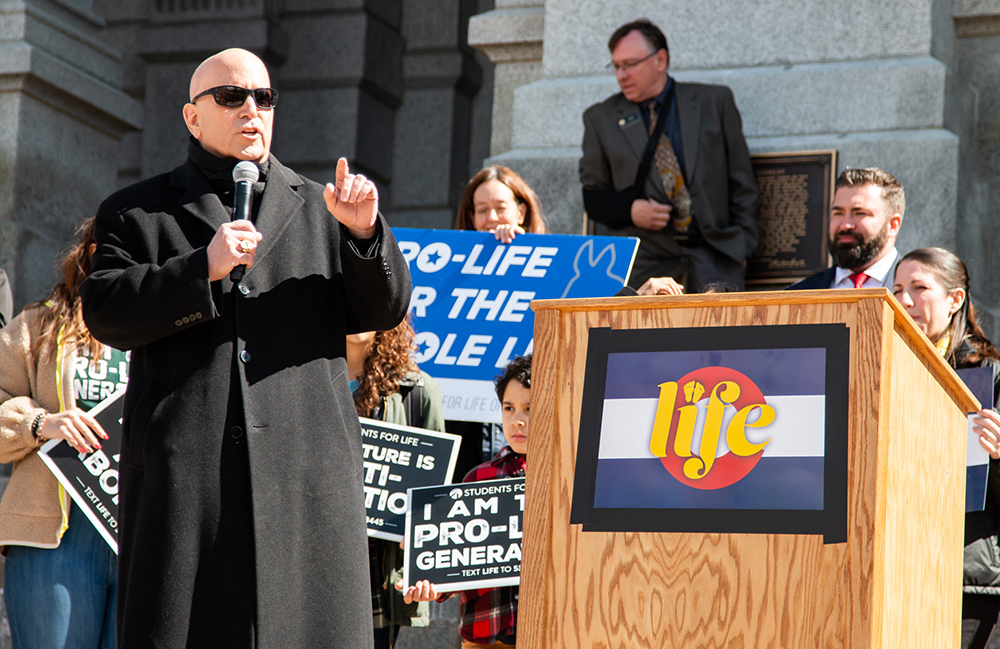 NEW YORK – Testifying against legislation that would codify an abortion right into Colorado law, Archbishop Samuel Aquila of Denver spoke out against the idea that government, not God, has jurisdiction over the right to abortion. the life.

“At conception we receive the gift of life and claim the right to life, which is granted by God and not by the government,” Aquila said. “The only duty and the only task of government is to recognize the right to life and to protect life, if it really is a just government. But abortion robs some babies of that gift.

“[Abortion] makes government God, and governments can change for good or for bad, depending on who is in charge,” he said. “Abortion has become an idol, which is tragic, because it promotes evil rather than the common good and the truth of the dignity of human life.”

Aquila’s testimony was read to the Colorado Senate Judiciary Committee on March 17 by Brittany Vessely, executive director of the Colorado Catholic Conference. Vessely was at the hearing in person representing Colorado’s three Catholic dioceses. Auxiliary Bishop Jorge Rodriguez of Denver and Bishop Stephen Berg of Pueblo zoomed in and also presented their own testimony before the committee.

The interventions by the state’s Catholic leaders were the latest advocacy attempts against the legislation, called the “Reproductive Equity Act,” as it makes its way through Colorado’s Democratic-controlled legislature.

The Reproductive Equity Act passed the Colorado House of Representatives on March 14 by a 40-24 margin, sending it to the Colorado Senate, where it is expected to pass with a 20-15 Democratic majority. From there it would go to the office of Governor Jared Polis, who has expressed his intention to sign the legislation.

Despite March 17 testimony from Catholic leaders and hundreds of others, the legislation was approved by the Colorado Senate Judiciary Committee on a 3-2 party-line vote.

If passed, the Reproductive Equity Act would not only codify a right to abortion in Colorado, but it would guarantee the right to an abortion throughout a pregnancy. Only three other states — New Jersey, Oregon and Vermont — have such a law on the books. Twelve other states guarantee abortion until viability, which is considered to be around 24 weeks.

The text of the Reproductive Equity Act makes it clear that the bill responds to anti-abortion legislation that has been enacted across the country and, in particular, to the likelihood that the United States Supreme Court will United cancels or significantly limits Roe vs. Wade with his Dobbs v. Jackson Women’s Health Organization decision expected later this year. The bill states, “Access to abortion and reproductive health care is currently under attack across the country.”

Colorado Democratic Rep. Meg Froelich, who sponsored the reproductive equity act, said so when the legislation passed the House of Representatives on March 17.

“Across the country, the GOP is introducing and passing extreme laws to criminalize those who seek reproductive health care and to completely ban abortion, no exceptions,” Froelich said. “We’re here to say this isn’t going to happen in Colorado. We are rising to protest abortion access and I am thrilled the Reproductive Equity Act passed the House.

Catholic leaders have shared personal views in addition to the Church’s position on abortion in their appeals to lawmakers.

Rodriguez spoke about being close to Denver’s Hispanic community as a Hispanic immigrant himself. He said the Hispanic community is a pro-life community where “life, children and family are the great values ​​and the treasures.” Bishop cited a 2019 Public Religion Research Institute survey that found 52% of Hispanic Catholics are pro-life, and July 2021 census data that found 5.8 million Hispanics live in Colorado.

“With a growing Hispanic population, why is the Colorado General Assembly introducing the most extreme abortion legislation in the nation?” Rodriguez asked.

Aquila’s testimony spoke of his experience witnessing two abortions as a student working in hospitals. Aquila said the memory of “two tiny humans destroyed by violence” haunts him. He also reiterated that it is God’s decision that comes into this world.

The Senate vote on the bill is expected to take place next week. Ahead of the vote, the Archdiocese of Denver issued a call to action for those opposed to the legislation to contact their state senators at https://cocatholicconference.org/news/.

Bishops Await Vatican Instruction for Consecration of Russia and Ukraine