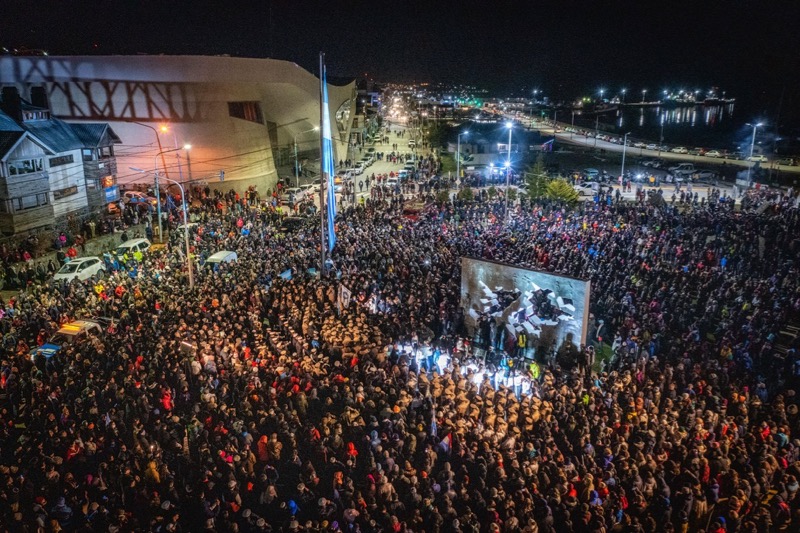 Large numbers of people in Ushuaia, Argentina take part in a commemorative event on the night of April 2, 40 years after the start of the Falklands War between Argentina and Britain.

Leaders of the Catholic Church in Argentina last weekend joined in the country’s commemoration of the 40th anniversary of the Falklands War.

The main celebration was a mass in the National Basilica of Our Lady of Luján on Saturday April 2, presided over by the president of the episcopal conference, Bishop Oscar Ochea.

In the homily of the Mass, Bishop Jorge Eduardo Scheinig, Bishop of Mercedes-Luján, remembered the dead soldiers and the veterans. He regretted “the sad testimony left to us by the survivors of the Falklands, what they experienced during the war and after it, that of feeling abandoned to their fate”.

“This terrible human experience was a very grave sin for which we have repented little and from which we have learned very little,” he said.

“How then can we all feel that we are daughters and sons of the same country? How to regain confidence and pride in being Argentinian? What can we do to make our country loved more than superficial or meaningless emotion? What can we do so that the lives of so many young people killed in the Malvinas are not a constant reproach to our consciences, but awaken them and push us to a new patriotism?

The day before, the military bishop, Msgr. Santiago Oliveira, celebrated a mass in the military cathedral of Buenos Aires during which he called for dialogue and condemned the war.

He continues: “We pray for those who died, for those who gave their lives, we renew the desire that justice be done, because Argentina demands, not its sovereignty over the islands, but the exercise of sovereignty on the Falklands, and for this we must ask and accompany those who govern the destiny of the Nation.

“We pray that a day will come when such evil, such violence, such powerlessness, such injustice will be repaired and that we can say, not as a slogan, that the Malvinas are truly Argentines.”

A missing note from the Church’s celebrations was the role of Argentina’s military dictatorship in launching the invasion, which President Alberto Fernández called “the terrible and irresponsible decision that sent hundreds of our fellow citizens to their deaths. “.

He continued, “We must say that those military leaders who brought shame to our armed forces today are firmly a past that no one wishes to return to.”