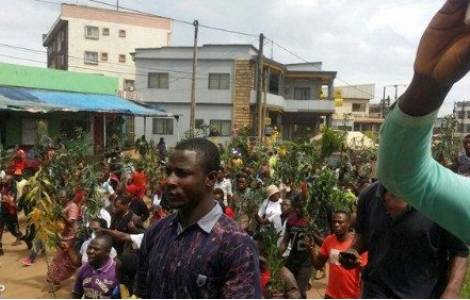 AFRICA/CAMEROON – Bishops on the attack on the Catholic Church: among those who attack the churches, there are also members of our communities

AFRICA/CAMEROON – Bishops on the attack on the Catholic Church: among those who attack the churches, there are also members of our communities

Mamfe (Agenzia Fides) – The attack on the Catholic Church of Saint Mary in the village of Nchang (diocese of Mamfe) is an “atrocious act”. The authors and instigators of this crime, whatever the country, must repent and abandon the “evil ways” which have placed them in the position of “fighting against God and not against men. And no one fights against God and won’t win,” the Bishops of the Provincial Episcopal Conference of Bamenda, in the English-speaking region of Cameroon, told armed militants who last Friday evening, September 16, attacked and set fire to the Catholic, and kidnapped five priests, a nun and three lay people (a catechist, a cook and a young girl). Against the backdrop of years of violence in English-speaking Cameroon, the bishops stress in a joint statement that attacks on church communities represent “the new game of struggle” directed against “missionaries who give their lives in the service of the people”. attacks – said the bishops – affect the Catholic Church as well as the Presbyterian and Baptist churches, and curiously enough, some of those who violently attack the churches are people who belong to these churches or have benefited from their generosity.
After learning of the arson and the kidnapping of the priests and pastoral workers, Bishop Aloysius Fondong Abangalo of Mamfe went to the burnt church to take the cross and consecrated hosts kept in the tabernacle.
The ecclesiastical province of Bamenda comprises the Archdiocese of Bamenda, the dioceses of Kumbo, Kumba, Mamfe and Buea. “What happened,” the bishop said in a video released after his visit to the burnt church, “is an abomination. Simply put, God has been made to understand that we don’t want him in our country”. Bishop Abangalo invited the entire population of the diocese of Mamfe to dedicate the rosary of reparation throughout the month of October, “for this act of abomination committed in our country”.
In the joint statement, the bishops of the ecclesiastical province of Bamenda also affirm their prayer “for the forgiveness of the guilty, as did Christ who prayed on the cross: Father, forgive them, for they do not know what that they make”. (GV) (Agenzia Fides, 09/19/2022)