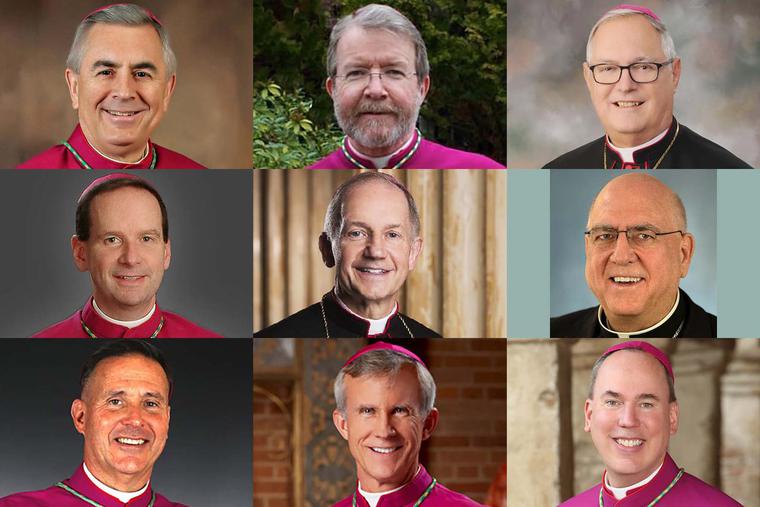 I asked nine active Catholic bishops working in different parts of the United States to comment on issues of public policy and culture that they believe are important to the country. Here are their thoughts.

Bishop Joseph L. Coffey archdiocese for military services has a long history in the pro-life movement, including praying at abortion clinics and participating in Operation Rescue. He commented:

“I remember when the Roe v. Wade was returned in 1973. I was 13 years old. My father told us about it at the table. From that moment, I became a pro-lifer. In the years that followed, we made many annual trips to Washington, DC, for the annual March for Life. We want to see the United States Supreme Court overturn Roe. But we know this won’t end our pro-life efforts – we will have to continue our work at the state level. Like the majority of the bishops of [our 2019] meeting indicated, abortion is the preeminent life issue of our time.

Bishop Thomas Parocki of Springfield, Illinois agreed that abortion was a key issue. He said:

“When I talk about the right to life, I say that abortion is the defining issue of our time. Will we be a culture of life or, as Pope John Paul II said, a “culture of death?” Unfortunately, I don’t see many of our politicians talking about it. We cannot ignore the defining question of our time; this issue must be at the forefront when we choose candidates for public office.

“[Regarding Roe v. Wade, the 1973 U.S. Supreme Court decision striking down the nation’s anti-abortion laws] … I think we’re in a stronger position than in the 1970s. Back then, a lot of people thought that was the trend and that abortion would always be with us. The Supreme Court has ruled and the case is closed. But it is far from being the case.

“Today, we see that many young people are very pro-life. But, before we can change laws, we must change hearts.

Bishop Thomas J. Tobin of Providence, Rhode Island, played a leading role in opposing same-sex “marriage” in his state, an effort that failed. He commented:

“I was terribly disappointed when [same-sex “marriage”] happened in Rhode Island, despite the strong presence of the Catholic Church and the large number of Catholics in our general assembly. A number of Catholic legislators neglected our faith, which was heartbreaking. Shortly thereafter, the United States Supreme Court announced its [Obergefell] decision.

Bishop Ronald Gainer is head of the Diocese of Harrisburg, Pennsylvania, and is president of the Catholic Conference of Pennsylvania. Speaking on behalf of the Conference, he said:

“Among our main concerns are the so-called equality regulations that 16 of our municipalities have adopted. These regulations mandate non-discrimination, including discrimination based on sexual identity and gender issues. Some have no religious exemptions, which is very troubling. They could force us to violate our Catholic principles in areas such as employment and adoptions. We would like to see a statewide initiative protecting religious freedom that would overturn harmful provisions of municipal law. »

Bishop Michael Burbidge of Arlington, Virginia, published a 2021 letter titled “A Catechesis on the Human Person and Gender Ideology.” He observed:

“The issue of gender ideology is sensitive and has an impact on parishes and families. I think it is important at this time to teach the truth about how God created us in love and to equip the faithful to be able to understand and explain to others what Jesus taught. …If we deny that there is a God who once created us as his beloved child, when we do not accept who we are and how God created us as male or female, we let’s reject everything that comes from it, and everything that God teaches. Error cannot bring peace or happiness to his life. Acceptance of gender ideology increases struggles and does not make things better. Do not assert what is false. Answer truthfully.

Archbishop Joseph Nauman of Kansas City, Kansas, expressed concern about HR 5, the so-called “Equality Act,” which House Democrat Speaker Nancy Pelosi said will be “a momentous step toward ending the final and full of discrimination against LGBTQ Americans”. The Archbishop replied:

“I fear this will force religious institutions like ours to do things that violate our conscience or prevent us from participating in government programs. This is related to gender issues and other issues as well. Unless it can be improved, I would vigorously oppose it.

Bishop Timothee Freyer of the Diocese of Orange, California, saw his own father die when the bishop was just 13 years old. Consequently, he lived a teenage life without a father at home (although due to death, not abandonment) which gave him a sensitivity to children who do not have a father at home. . He remarked:

“Many children are raised in homes without their biological father. Boys, in particular, lack this pattern for learning to be good Christian men.

“Furthermore, many men are not spiritual fathers in the home. They may be good men, but they don’t lead the family to Christ, or even go to mass with the family. Studies show that a good indicator of whether or not children remain Catholic is whether or not their fathers actively practice the faith. If there is no spiritual father at home, it is easy for children to drift away from the Faith.

“The crisis of fatherlessness also has a negative effect on society as a whole. Many of those who are drug addicted, homeless or have mental health issues in our country are the products of fatherless homes. It has wreaked havoc in our country; millions of children grow up without the benevolent influence of a father.

Secularism imposed by the state

Bishop Liam Carl of the Diocese of Baker, Oregon, is concerned about state actions that impede the work of the Church. He explained:

“In Oregon, I am increasingly concerned about the bureaucratic imposition of secular morality. We asked a state bureaucracy to make a change to our public insurance that would allow 15-year-olds to have sex reassignment procedures without parental approval. The bureaucracy has made up its mind and everyone is expected to line up.

“Or, there was a bakery outside of Portland that refused to bake a gay wedding cake. The state fined them $135,000 and kicked them out of business. They are trying to force citizens to do something against their conscience.

Birth control and the sexual revolution

Bishop Joseph Strickland from Tyler, Texas, is concerned that secular views on sex and marriage are harming society. He said:

“I was 10 years old in 1968, the year Humanae Vitae came out of. It has been, on the whole, ignored and contradicted. I think much of the evil that has come to the world through the sexual revolution is due to ignoring the Church’s teaching on sexuality articulated by documents such as Humanae Vitae. In one of the paragraphs, Pope Paul VI makes a series of predictions about what will happen in the world due to the widespread use of artificial contraception [e.g., increase of marital unfaithfulness, a decline in morality, loss of respect for women, government promotion of contraception and family planning]. We have certainly seen that these predictions have come true.